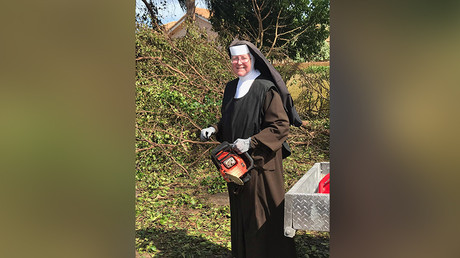 Miami was spared the worst of Hurricane Irma’s wrath but trees, power lines and at least three cranes were felled by the ferocious winds. As the clean up operation begins in earnest, one chainsaw-wielding nun is leading by example.

An off-duty police officer in Miami Dade County was surveying the damage in the area Tuesday evening when he happened upon a miraculous sight: Sister Margaret Ann of the local Archbishop Coleman F. Carroll High School in full garb slicing felled trees with a chainsaw.

“There was a need, I had the means, so I wanted to help out,” Sister Margaret Ann told CNN Tuesday. “We teach our students: Do what you can to help other people, don’t think of yourselves… That’s what I wanted to do.”

“The community will come out and help us. That’s what we do,” she said. “It’s good.”