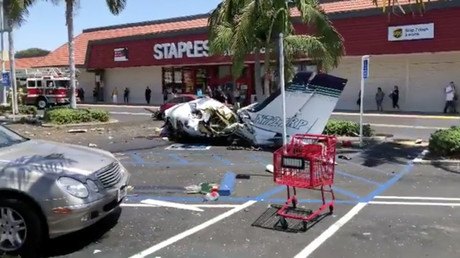 Five people were killed when a Cessna 414 plane fell from the sky onto a car-park in front of an office supplies store in Santa Ana on Sunday afternoon. Local authorities said it is ‘a miracle’ that no one was hurt on the ground.

The twin-engine 1973 Cessna light plane, bound for John Wayne Airport in Orange County, had roughly a mile to go to the airport when it crashed on the parking lot in front of the Staples store.

Photos of the incident show the plane’s debris scattered among the palms that surround the parking area. A car can be seen parked mere meters from the wreckage.

Another angle of the plane crash in Costa Mesa, so close to John Wayne Airport…a big question will be why the pilot was not able to at least attempt a freeway landing, which was done successfully near here twice in the last year @CBSLA@KNX1070pic.twitter.com/X4jgroYbWf

NEWS Cessna 414 (N727RP) crashed near a shopping centre on approach to John Wayne Airport, California under unknown circumstances. Killing all 5 on board. (5-AUG-2018). pic.twitter.com/UxbDxG9Xk5

Passersby immediately gathered on the sidewalk, taking photos of the scene as firefighters were attending to the incident.

The crash took place at around 12:30pm local time, when malls and stores typically bustle with customers. While the crew and passengers on the plane had died instantly, Orange County Fire Authority spokesperson Tony Bommarito said it was a miracle that nobody got injured on the ground.

“This is a Sunday afternoon and we had people shopping so the fact that there were no injuries on the ground is a miracle in itself,” he said, as quoted by the Los Angeles Times.

It was a close call for at least one person, whose car was damaged in the incident. Luckily, the driver of the parked car was shopping inside the store when the plane descended on his vehicle, the spokesman said.

“Fortunately, that person was inside the store shopping at the time of the impact,” he stated.

The Federal Aviation Administration revealed that the pilot had reported an emergency before the plane crashed. Witnesses, meanwhile, said that the pilot did not appear to slow down or attempt to change course as the aircraft was descending on the parking lot.

“It actually came down in front of us. We looked up and we just saw a plane fall. It lost control and it just fell straight down. It didn’t even look like it was trying to land,” Ella Pham told USA Today.

Authorities are still in the dark as to what was going on in the plane’s cockpit.

“I don’t know anything about what this pilot did or what he was thinking, but it could have been much more tragic,” Bommarito said.