A man who stalked a woman before pouncing on her and forcing her to the ground in an attempted rape on a London street has been caught on CCTV.

The attacker followed the woman off the EL2 bus in Dagenham, east London, and walked behind her on the road before pushing her over.

He then removed his jeans and exposed himself, before the 22-year-old victim managed to punch him in the stomach and shouted for help.

A driver in a passing vehicle then stopped and phoned police before the suspect ran off towards Wood Lane during the incident on March 6. 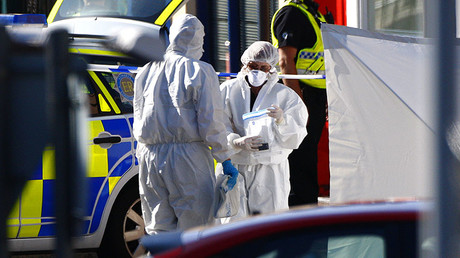 Police accessed local CCTV of the attack. Cameras on the bus also capturing the suspect before he disembarked.

The man has been described as in his 30s with fair hair and a short brown beard, and was wearing a grey top with a white shirt underneath and blue jeans.

Police are now appealing for help to identify the man, who had been on the same bus as the woman at around 18:20 GMT.

Detective Constable Matt James from the sexual offenses, exploitation and child abuse command, told the Daily Mail: “The woman is very shaken from her ordeal.

“She was able to shout for help and use self-defense to flee from her attacker.

“We are keen to identify the man in the CCTV footage so we can speak to him about the incident.

“We would also urge anyone who witnessed the incident to contact us.”