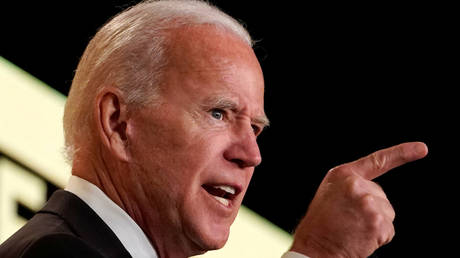 Former Vice President Joe Biden is reportedly throwing his hat in the ring for the 2020 presidential election – after months less of speculation than of certainty and confusion as to what was taking him so long.

“Be careful what you wish for,” Biden told a room full of firefighters on Tuesday after hinting that he may need the union’s support “in a few weeks.”

“I’m giving it a shot,” Biden reportedly told a Democratic lawmaker who asked to remain anonymous, according to the Hill. While Biden spokesman Bill Russo claims the former vice president has not made a “final decision,” his impending candidacy in an already-crowded field is an open secret in Washington, with Senate and House sources reporting the Democrat is “confident,” “95 percent committed,” and merely trying “to check all boxes” before officially declaring his candidacy.

Also on rt.com
Joe Biden reminded of past ‘humanitarian’ actions after he blasts Maduro over aid block


While a 76-year-old white man may not be the obvious choice for a Democratic Party that has become increasingly centered on identity politics, he’s a year younger than Bernie Sanders, and his track record as a middle-of-the-road pro-business centrist will be catnip to donors put off by the party’s left-wing candidates even as he banks on his “blue-collar appeal” to draw working-class voters – and conservatives sick of Trump.

“When it comes to civil rights and civil liberties, I’m a liberal but that’s it. I’m really quite conservative on most other issues.”

Why would someone ‘quite conservative’ strike fear into the Republican Party when GOP-lite candidates such as Clinton lose massively? https://t.co/2Gnt4UNTjH

Mainstream media and party insiders have hailed him as a relic of a more dignified campaigning era.

This episode was, among other things, another reminder that Biden is stepping into a fundamentally different media and political environment than the one that existed when he was in office. https://t.co/wvhPpZcbRQ

“At this stage in life, @JoeBiden doesn’t have a lot to lose and has a lot to gain. And he has a lot to offer the county,” said Rep. @GerryConnolly, a former Biden staffer. “He offers the prospect of some desperately needed healing in this country after this scourge.” https://t.co/ZRFvMeJp0N

But not everyone is dazzled by “Lunch Bucket Joe.”

I served in Iraq and there is absolutely no way in hell anyone connected with the decision to go in should ever be POTUS. We should all tell our horror stories from war to remind everyone. So many people died, trillions spent, and nations destabilized and destroyed. #NoBiden

What part of a Biden run are you most excited about?

Biden taking the baton from Kamala as the establishment’s 2020 version of Hillary 2.0 against Bernie.
Biden’s horrible voting record alone should be enough to end this embarrassing charade now.#BidenForBankruptcy#StillWithering🥀🥀🥀

And he’s made no secret of his lack of sympathy for the current generation of voters – who have returned the favor.

Per HarrisX, Generation (aka age) is THE divide in the Dem primary right now. This is an average of the last few days… Bernie Sanders has got the young and Joe Biden has got the old. (Note other polls confirm this.) pic.twitter.com/6cBX3qz1hk

Biden briefly tried to win his party’s nomination in 2008 but soon opted to attach himself to Barack Obama’s campaign as VP instead. He last tried to run for president in 1988.