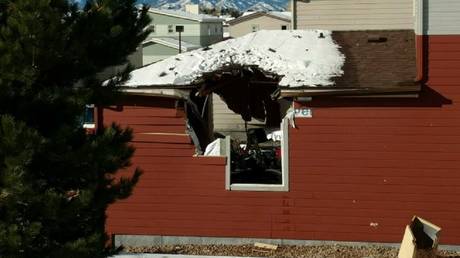 The dramatic crash happened in Highlands Ranch, Colorado at about 9:30am on Wednesday, when the vehicle smashed through one home’s garage before plowing into a second.

Douglas County (DC) Police say the vehicle was being driven by an 86-year-old man who “had medical issues prior to the car going off [the] roadway.” The driver was hospitalized for serious injuries, but they are not thought to be life-threatening, according to local law enforcement.

Update to Dunning Cir. Crash: This is a video showing the car traveling across Fairview. While the driver did sustain serious injuries, we’re glad to share that doctors say he will survive.. Luckily nobody else was hurt! pic.twitter.com/AMqI34nl5G

Luckily, nobody inside the homes was injured in the bizarre crash, and none of the other nearby vehicles were struck by the rogue car.

An investigation is still underway, but police don’t intend to press criminal charges.

Around 9:30 patrol and fire responded to a vehicle that crashed through portions of two homes in Highlands Ranch on Dunning Cir. The driver was taken to local hospital, with injuries, no other injuries reported. Traffic investigators will be working to determine what happened. pic.twitter.com/9QQ5OJqcYv

CCTV footage shared by Douglas County Sheriff’s Office shows the vehicle soaring off Grace Boulevard in Highlands Ranch at great speed and smashing into the homes on Dunning Circle. A photo shared by police of the first home that was struck shows how high the car was flying through the air when it plowed into the building.

Neighbors who heard the almighty crash told CBS Denver that they initially thought there was a gas explosion. “I was drinking my coffee this morning around 9:30 and I heard a huge explosion and I saw debris flying up in the air everywhere,” said Nancy Meadows.