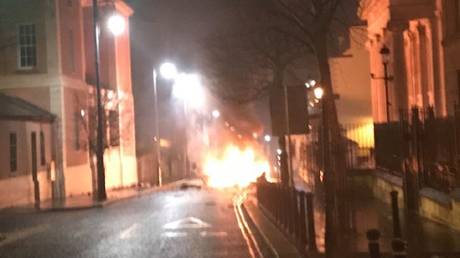 A car was burned to ashes after a powerful blast shook downtown Londonderry, a city in Northern Ireland on the border with Ireland. The explosion took place outside a local courthouse, prompting a major police operation.

What police believe was a bomb planted in a van went off around 8:15pm local time on Bishop Street in the city center. Police received tips about the incident half an hour before the blast, the Irish Times reported

When they arrived at the scene, the vehicle, reportedly a hijacked pizza delivery van, was already engulfed in flames. After the fire was put out, only the scorched carcass of the vehicle remained.

This picture shows the scale of tonight’s car bomb attack in Bishop Street. Little left of the delivery van stolen earlier in the evening in Derry Londonderry. Police operations continue as bomb disposal teams make their way to examine another vehicle. pic.twitter.com/pMSeOww3BF

No one was injured in the blast, police said.

There were fears that another car on the same street might be rigged with explosives, with police reporting “another car we are not happy about.”

Police later said they had checked the vehicle and were “just dealing with extensive crime scene.”

The area was put on lockdown, with bars and clubs located on the busy street forced to close their doors. Buildings adjacent to the area were evacuated and a cordon was set up.

Police have not named any suspects, or the potential perpetrators’ motives. However, the incident has already been condemned as a terrorist attack by the Republic of Ireland’s Deputy Prime Minister Simon Coveney.

“I utterly condemn the car bomb terrorist attack in Derry this evening. There is no place and no justification possible for such acts of terror, which seek to drag Northern Ireland back to violence and conflict,” Coveney tweeted.

I utterly condemn the car bomb terrorist attack in Derry this evening. There is no place and no justification possible for such acts of terror, which seek to drag Northern Ireland back to violence and conflict. @RTENewsNowhttps://t.co/sKUaXGCx5b

The leader of Norther Ireland’s Democratic Unionist Party, an ally of British PM Theresa May’s minority government, has also denounced the incident as a “pointless act of terror.”

The blast is said to have occurred near a shelter for elderly people who were shaken by the incident, Sinn Fein’s local MP Elisha McCallion said, calling the attack “not representative of the city” which has long moved forward from the violence associated with Irish nationalists.

While no group has so far claimed responsibility for the attack, speculation has been rife that the bomb was detonated by the New IRA, an alliance of republican militant groups that has conducted similar attacks in Londonderry, also known as Derry, in the past and has been involved in violence against police.


In July, it claimed responsibility for a spate of attacks targeting police in Derry as riots broke out in the Bogside area of the city. The group said that it fired 10 shots and hurled two grenades at police. No one was injured.

The New IRA doesn’t recognize the 1998 Good Friday Agreement which included two separate agreements among Northern Ireland’s political parties and between the British and Irish governments. The deal has helped reduce the number of politically-motivated attacks, but sporadic violence continues to this day.