A 100-year-old ghost town founded during the California Gold Rush is being modernized for the “green rush” after a cannabis company purchased all the land, buildings and businesses for $5 million.

On Thursday, American Green, a marijuana technology company, announced they purchased a small town in San Bernardino County with the intention of turning it into the “the country’s first energy-independent, cannabis-friendly hospitality destination.” 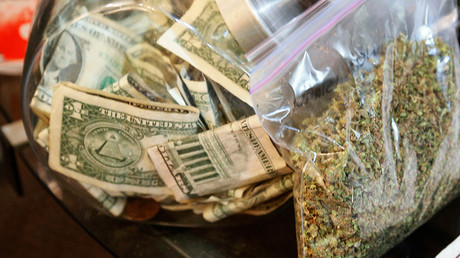 “The Cannabis Revolution that’s going on here in the US, has the power to completely revitalize communities in the same way gold did during the 19th century,” David Gwyther, chairman and president of American Green, said in the announcement.

Located on the border of Nevada and California, the desert town of Nipton has a population of around 20 people, according to the Los Angeles Times. The town also comes with its own water supply, a general store, an RV park, a campground and a five-room hotel from 1904.

Last year, the previous owner, Gerald Freeman, placed the entire town on the market for $5.2 million dollars because he was too old to maintain it anymore. He told the Las Vegas Journal-Review that he wanted to sell it to “someone who’s committed to sustainability of the human race.”

American Green, the largest and second oldest publicly traded cannabis company in the US, said they bought the town as part of a 120-acre land purchase. The company plans to keep the existing structures intact and build new ones that they hope will attract tourists and boost the local economy.

“This acquisition allows us to channel the myriad interests in cannabis production and consumption for an immediate positive impact to this community’s members and to cannabis consumers across the country,” Gwyther said in a statement.

The company said it will start by bottling and distributing water infused with Cannabidiol (CBD), a cannabis compound that is believed to have medical benefits without making people feel “stoned.” Then, the company plans to spend $2.5 million over the next 18 months to revitalize the town, according to Bloomberg.

The company wants to develop the nearby aquifer system and expand the town’s existing solar farm to create a completely energy-independent town.

Tony Castrignano, who is the owner of the realty company making the sale, told the Las Vegas Journal Review that the current photovoltaic system provides up to 45 percent of the energy the town needs.

Project manager Stephen Shearin said he hopes the work they are doing in Nipton will inspire other companies.

“We thought that showing that there was a viable means of having a cannabis-friendly municipality and further making it energy independent could be a way of really inspiring folks to say, ‘Why can’t we do that here?’” Shearin told Bloomberg.

Shearin said he wants to “create a community that is accepting and understanding” of marijuana use.

“The [idea] here isn’t to create ‘Woodstock 2017,'” Shearin said. “It’s about creating an environment where people come to work and share in a community.”

Both Nevada and California are among the four US states to have legalized marijuana. The drug is still illegal under federal law.