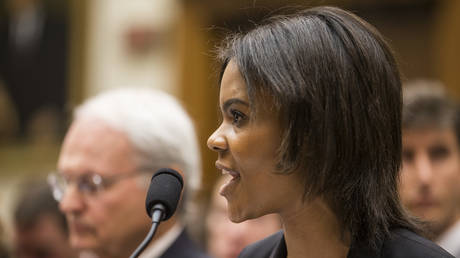 Sparks flew in the House of Representatives as Rep. Ted Lieu (D-California) tried to accuse conservative activist Candace Owens of being an apologist for Adolf Hitler at a hearing on hate crimes and white nationalism.

Owens, an African-American activist with Turning Point USA and a prominent supporter of President Donald Trump, was one of the witnesses invited by the Republican minority on the House Judiciary Committee.

“Of all the people the Republicans could have selected, they picked Candace Owens,” said Lieu. He then played a 30-second clip of Owens supposedly praising Hitler, and asked Anti-Defamation League’s senior VP of policy Eileen Hershenov for comment if people seeking to “legitimize Hitler” was “playing into white nationalist ideology.”

The snippet Lieu played was from a December 2018 event in the UK, where Owens was trying to answer a question from an audience member about the legitimacy of nationalism by pointing out that nationalism and Hitler’s ideology of national-socialism were not the same thing. BuzzFeed featured the clip of her response – minus the question and context – in a story in February, leading to a partisan brawl on social media.

Given a chance to respond by a Republican lawmaker, Owens lit into Lieu, saying he must think African-Americans were “stupid” and would not seek out the full video, and calling the move “unbelievably dishonest.”

This prompted Committee chair Jerry Nadler (D-New York) to interrupt and demand that Owens “may not refer to a member of the committee as stupid.”

“I didn’t refer to him as stupid. That’s not what I said at all,” Owens replied. “You didn’t listen to what I said.”

Nadler’s response was a shrug.

The greatest part of the hearing today was when @RepJerryNadler simply **shrugs** after I catch him flat-out in a lie.

I have literally watched this clip and cannot stop laughing at the audacity of Democrats.

They just don’t even care when they’re caught lying. 😂😂😂 pic.twitter.com/V3WgujYHFh

Owens had attracted the ire of Democrats on the committee by arguing that the hearing was not about white nationalism or hate crimes but “about fear-mongering, power and control.”


The president’s son, Don Jr. praised Owens on social media after the hearing, and roasted Lieu for attempting to discredit her by claiming she somehow supported Hitler. He wasn’t the only one.

Wow. Well done @RealCandaceO!!! Great to see someone call out the Dems on their purposeful manipulation of facts for their narrative. Since the media runs with anything they say and is the marketing wing of the DNC they aren’t used to getting called out for the repeated BS.🔥🔥🔥 https://t.co/aQpVzF0clo

What Ted Lieu attempted with Candace Owens is a classic example of a Struggle Session. During the Cultural Revolution, counter-revolutionaries were brought out to schools or sports areas while officials read off their alleged crimes and the crowd chanted. No response was allowed

The truth is @RealCandaceO is proving that black people don’t have to be democrats (a fairly obvious point) and Dem politicians like Ted are freaking out they’ll lose control. I wouldn’t share a stage with an antisemite as I am doing with Candace tonight. Drinks on me after!