A Facebook group dedicated to posting horror stories from male drinking societies has resulted in a review by Cambridge University, enraging ‘Archbishops of Banterbury’ everywhere who liken the campaign to an ”online fatwa”.

While fatwas are usually reserved for blasphemers, Salman Rushdie, and the occasional Larry David plot line, the very existence of university drinking clubs are under threat as emerging stories allege charges of sexual harassment, classism, racism, and general uncouthness, from their members while on the sauce. 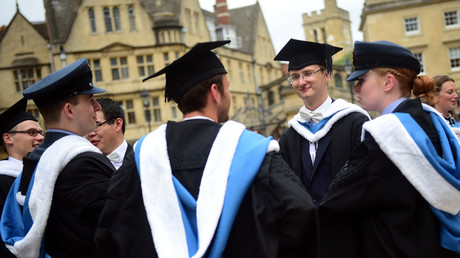 Anonymous posts made by the group Grudgebridge, document tales of members sexually harassing “attractive fresher girls” after confiscating their keys and phones; a male member of a society saying female students would “be going home in wheelchairs” after an event; and a drinking society member trying to ban someone from entering a bar because they went to a state school, The Guardian reports.

Grudgebridge started in early May with a video taken by its founding administrator at a soiree held by the Trinity Hall Crescent in a local boozer, where a sodden student made a damning speech which called inclusivity the “single biggest problem facing the [society] in the modern age”.

The administrator, who no longer runs the page, then vowed to start a campaign to take down the college drinking clubs calling them “networking grounds for public school boys where they can sleazily lubricate their ways into six figure salaries as soon as they leave uni.”

Meanwhile, the student who made the remarks is now being investigated by Trinity Hall. It is thought he was not a member of the Crescents – the society which was disbanded due to the incident.

Since the allegations surfaced, Cambridge University Student Union (CUSU), in conjunction with student sexual harassment campaign group, Cambridge for Consent, is to draw up a code of conduct for drinking societies and should be in place by the end of term.

Daisy Eyre, CUSU student president, called the drinking clubs “incredibly problematic and disruptive,” adding that the governing body of the union was expected to vote on whether to disband the societies entirely.

Now administered by two female students, Grudgebridge said the page compliments the university’s Breaking the Silence campaign, which allows students to anonymously report instances of sexual misconduct, since drinking clubs had only responded to the Breaking the Silence now, “when they’re at risk – when they’ve been exposed.”

But not all are happy at the attempts to shut up shop on the bad behavior. Andreas Bedorf, who sits on the CUSU council as the president of Downing College’s graduate students, told the Guardian that the Grudgebridge campaign “reminds me of a witch hunt or inquisition”.

Another senior student representative said the Facebook campaign was akin to an “online fatwa,” with a number of fake stories reportedly already being removed from the page.

University authorities, meanwhile, said colleges were in liaison with student bodies to discuss the best way to tackle unofficial drinking clubs and to see if the allegations of bad behavior fall under university disciplinary procedures.