London-based political strategy firm Cambridge Analytica has suspended CEO Alexander Nix who had boasted of global backroom influence. RT has hosted a debate on what the fallout of the unfolding Facebook data scandal could be.

“It looks like it’s undisputed that they did things that … were clearly against the law,” Goldstein said. “They either clearly went over the line or they went right up to it.”

The Democrat advisor insinuated that the Department of Justice would not act against CA as “Donald Trump was the beneficiary. I wouldn’t hold my breath on that happening.” 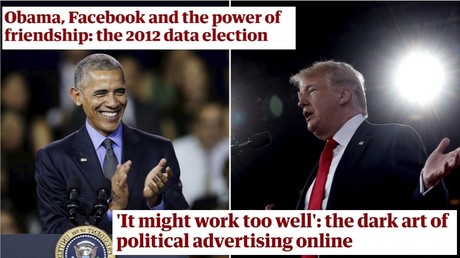 “The entire point is being missed here” Lionel shot back. “It’s not Cambridge Analytica, it’s that Facebook is a tool, a proxy, if you will, of the government! It’s a surveillance unit!”

“Facebook, Apple, everything that we do is sucking up every bit of information that we have,” Lionel warned. “Where has the world been? You’re living in a panopticon!” The previous few days had seen an online trend urging users to #DeleteFacebook.

Goldstein repeated claims that the “US intelligence community unanimously agreed that the Russians did meddle” and worked with WikiLeaks to leak emails from Hillary Clinton’s campaign manager John Podesta, claims that have never been proven.

Lionel dismissed the whole Russian meddling narrative “This yarn was devised by the Democratic Party and Hillary Clinton to explain how she lost a rigged election,” he said. “Whom can we get to explain this? Ah! The Russians!”

Special Counsel Robert Mueller “will present a case in black and white about what the Russians did and didn’t do,” Goldstein insisted. “And people who are clear-thinking will believe it, and people who have a bias going in will dismiss it.”

“Hillary Clinton is never going to be president. Get over it. Go and see a grief counselor,” Lionel hit back.