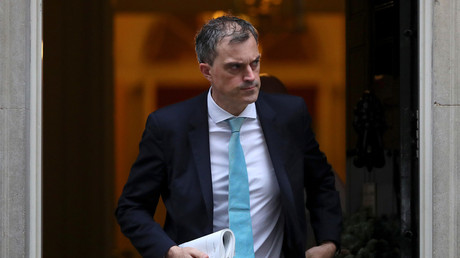 There are calls for Julian Smith, the Tory Chief Whip to resign following claims he urged three Conservative MPs to ‘defy pairing deals’ in order to win a knife-edge Brexit vote on Tuesday, breaking parliamentary convention.

Pairing is a parliamentary convention by which pairs of MPs on opposing sides of the House of Commons agree not to vote so that being absent due to reasons such as being on maternity leave, like Lib Dem MP Jo Swinson, does not count against that member.

On Tuesday she announced on social media that she would be paired with Tory MP and party chairman, Brandon Lewis for the crucial Brexit vote (New clause 18) on a free trade area and customs union with EU, which the government subsequently won by a margin of 6 votes.

So if the govt is defeated on customs union (New Clause 18) and other issues, as I hope it will be, I’ll have to cheer quietly…

It now transpires that, according to a witness, Smith summoned Lewis before the crucial vote to tell him to breach the pairing deal between himself and Swinson to vote with the government, because it would be a very close vote, the Times reports.

Furthermore, it’s claimed that Smith urged two other Tory MPs that had been paired, to vote on new clause 18 – both sought clarification and ignored his instruction, according to the Times.

The paper reports one Tory MP as saying: “This suggests a worrying pattern of behaviour and could amount to a breach of trust.”

The revelations has sparked condemnation from those on social media. MPs and political commentators have called on Smith to resign, with some insisting he should be sacked if he doesn’t walk himself.

MPs such as Labour’s deputy, Tom Watson who insists: “If true, this is despicable behaviour which makes politics even more inaccessible for women. If true, Julian Smith must resign, or be sacked.”

Tory chief whip told three MPs to defy “pairing” deals on crucial Brexit votes according to today’s Times. If true, this is despicable behaviour which makes politics even more inaccessible for women.

If true, Julian Smith must resign, or be sacked.https://t.co/ysKYWZNadQ

Watson’s sentiments were echoed by Dawn Butler, Labour’s shadow women & equalities secretary tweeting “If these reports are correct, the Tory whips, Brandon Lewis and the Prime Minister have been telling untruths about their shocking move against an MP on maternity leave.”

If these reports are correct, the Tory whips, Brandon Lewis and the Prime Minister have been telling untruths about their shocking move against an MP on maternity leave. If they can’t give a full explanation, surely the Chief Whip and Conservative Party Chair should resign. https://t.co/rWWmFSLEQH

Oh wow: according to The Times, the Chief Whip Julian Smith told Tory MPs to break pairing deals to try and win Brexit votes through duplicitous means. If that’s true, he has to resign. https://t.co/dGT3ieij0G

Yesterday, Theresa May said at PMQs @BrandonLewis had made an honest mistake when disregarding his pairing arrangement with @joswinson. Now, it emerges that MPs were instructed to do so by the chief whip. She lied outright to Parliament.

The story appears to contradict the narrative previously given by Smith and Lewis, who both insisted that it had been a “mistake” in apologetic tweets sent to Swinson, following the critical Brexit vote on Tuesday.

I’m sorry Jo. I think it was an honest mistake made by the whips in fast-moving circumstances. I know how important the pair is to everyone, especially new parents, and I apologise. Also apologies for late reply, been speaking at an event.

Prime Minister Theresa May said on Wednesday that the failure to honor the pairing convention was not “good enough” but wouldn’t commit to introducing rules to establish a system of voting during maternity leave.