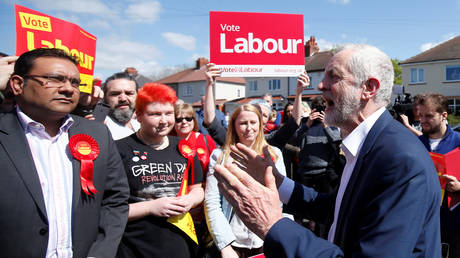 Labour MPs who voted with Theresa May’s Tory government on key Brexit amendments on Tuesday have caused uproar among key party figures, with some suggesting they should be deselected.

Some 14 Labour MPs sided with the Conservatives and voted against a Brexit amendment tabled by their party colleague Yvette Cooper, which sought to prevent a no-deal scenario by extending Article 50 past deadline day, March 29.

Also on rt.com
Corbyn urges May to back Labour’s deal & option of 2nd referendum to break Brexit deadlock


Seven Labour MPs voted for the government-backed Brady amendment that asks the Prime Minister to renegotiate her deal and find “alternative arrangements” to the Irish backstop, avoiding a hard border on the island of Ireland.

In voting with May’s administration, they defied Labour leader Jeremy Corbyn, who had instructed his MPs to vote for the Cooper amendment and against the Brady proposal.

It’s led to calls from prominent Labour activists – such as  Owen Jones, the Guardian journalist, and Paul Mason, the radical left-wing journalist and author – to deselect the offending MPs from the party. Mason insisted that Labour needs to expel the “xenophobes” and replace them with socialists.

Thanks for making this really easy: withdraw the whip, expel from the Labour party and select socialists instead of xenophobes… https://t.co/FcuO7SmrGX

Ash Sarkar, senior editor at Novara Media, argued that the Labour MPs had assisted the Tories in making no-deal more of a reality, claiming they had “utterly failed the people who got them elected.”

Caroline Flint, a former Europe minister, and Laura Smith, the MP for Crewe and Nantwich, joined veteran Euroskeptics Graham Stringer, Kate Hoey and Dennis Skinner in voting against Cooper’s amendment by 321 votes to 298.

Ian Austin, MP for Dudley North, and John Mann, MP for Bassetlaw, both of whom have been long running critics of Corbyn, voted with five other colleagues to back the Brady amendment – much to the dismay of Labour supporters.

This shouldn’t be up to local members Owen, the party should enforce discipline and remove the whip

Ian Austin, John Mann and Kevin Barron voted for May’s deal in the meaningful vote too

Seeing John Mann & Austin is no surprise to me.
They are the originators of “get Corbyn” at any cost.

Well I hope that costs them dearly as the clps of those constituent deselect them.

Labour MP John Mann voted twice with the Tories lastnight and against every Labour amendment.

Corbyn and May met in private after PMQs on Wednesday in an attempt to find common ground on Brexit. The Labour leader had previously ruled out negotiations with the PM until she took the prospect of a no-deal off the table.

Prime Minister May now has two weeks to broker key changes to the EU Withdrawal Agreement with Brussels, before MPs have another meaningful vote on her deal.

Early indications show that May has a tough task ahead to get the necessary concessions from Brussels. Numerous EU officials have told the UK government that the Brexit deal agreed late last year is not up for renegotiation in the wake of Tuesday’s parliamentary votes.