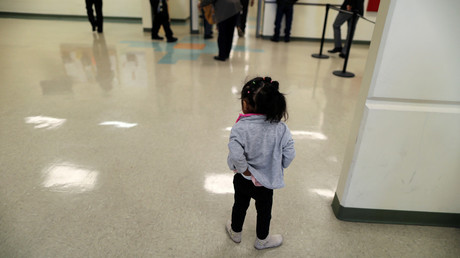 Journalists, Obama’s former speechwriter and other public figures all quietly deleted their misplaced horror at images of caged migrant children in the US when they found out the picture was taken under President Obama.

I saw this photo floating around and didn’t know if it was real.

Children of immigrants are being held in cages, like dogs, at ICE detention centers, sleeping on the floor. It’s an abomination.

The group, along with several others too excited to tweet their dismay to check the article’s publication date, told their ‘followers’ to look at the “disturbing” images and the immigration policy that put them there. The only problem? It was under President Obama’s watch, not Trump’s.

“This is happening right now, and the only debate that matters is how we force our government to get these kids back to their families as fast as humanly possible,” Favreau wrote in screenshots captured by Caleb Hull, senior editor of The IJR.

“Speechless. This is not who we are as a nation,” wrote former Mayor Villaraigosa.

A lot of big names are sharing this article from 2014, but they didn’t say a word back when it actually happened under Obama.

Favreau and the rest all quietly deleted the tweets when they learned of their blunder. Gold and Silverstein acknowledged their mistake, with the latter blaming his family and the former pretending she knew it to be old footage.

Correction: this link, which was going around this morning, is from 2014. Still disturbing, of course, but only indirectly related to current situation. My bad (and a good reminder not to RT things while distracted w family on the weekend). https://t.co/zbM4I0woUF

“No amnesia here. Our immigration system is a disaster and was a disaster long before Trump came along,” wrote Sarsour in apparent response to the gaffe.

No amnesia here. Our immigration system is a disaster and was a disaster long before Trump came along. Now it will become increasingly worse under this White Supremacist Administration who have made their hatred for immigrants crystal clear.

The photo was actually part of a story, published in 2014 by The Arizona Republic, about migrant children who enter the country illegally. The children, once apprehended by US Customs and Border Protection, were shipped to Nogales from overwhelmed processing facilities in Texas.

Photos of children at a migrant holding facility have gone viral on social media. The pictures are from 2014. They were originally posted with this azcentral article about unaccompanied migrant children who were transported to a facility in Arizona. https://t.co/2DXdszR0SU