Former Secretary of State John Kerry took some light-hearted and more serious jabs at President Donald Trump during a commencement address at Harvard’s Kennedy School of Government, including allegations of collusion between the Trump campaign and Russia.

Kerry returned to Massachusetts, the state he represented in the US Senate for 28 years, to address graduates of the prestigious Cambridge school. As with most commencement speeches, he offered the new alumni some advice.

“I’m often asked what the secret is to have a real impact on government,” he said. “Well, it’s recently changed.”

“I used to say, either run for office or get a degree from Harvard Kennedy School. With this White House I’d say, buy Rosetta Stone and learn Russian,” he joked. The audience cheered.

Kerry, a graduate of Yale, Harvard’s rival in the Ivy League, made reference to one of Trump’s seemingly favorite phrases in another joke: “Let me be honest about it. When it was first reported that a Yale grad was going to be speaking at Harvard’s Kennedy School, the initial reaction was: Fake news!”

Despite jokes about Trump ‒ and maybe being called upon to make peace between White House press secretary Sean Spicer and the press ‒ Kerry buckled down to more serious attacks on the president.

“I did not come here to be partisan. Or political. Or pessimistic. But I need to tell the truth,” Kerry said. “And I refuse to self-consciously twist myself into a pretzel and put on a contrived mantle of bipartisanship that alleges both parties are to blame for what’s happening – or not happening.”

“And anyway, you wouldn’t buy it since so many of you have marched and protested to take a public stand on your own,” he added.

Going back to his earlier comments about fake news, Kerry noted that a democracy doesn’t just rely on free speech, “but it relies even more on the speech being truthful. It is the truth after all that sets us free. And the truth is – no, this is not a normal time.”

Kerry then listed Trump’s actions that the former secretary of state deemed “not normal,” such as attacking judges, threatening journalists and firing the director of the FBI. “And it’s not normal that when you close your eyes and listen to the news, too often the political back and forth in America sounds too much like it does in the kinds of countries that the State Department warns Americans not to travel to.”

Yet Kerry also expressed optimism that Trump would not be allowed to destroy the US.

“I’m old enough to have seen a movie like this, maybe a time or two, and that’s why, about this part of the story at least, I’m actually more of an optimist,” he said, noting that Senator Joseph McCarthy and President Richard Nixon were both brought down through “the inherent strength of our Constitution and the courage of individual Senators, regardless of party,” who “empowered America to find its way out of what President [Gerald] Ford called a ‘national nightmare.’”

The only true crisis that could not be solved in a way the founding fathers envisioned in the Constitution was the Civil War, he said, citing President Abraham Lincoln’s quote that slavery would only be resolved by the sword.

“You know what, I don’t think even [President] Andrew Jackson could’ve stopped that one,” Kerry joked, referring to Trump’s “bizarre” assertion that the seventh president would have prevented the Civil War, which began 16 years after his death.

Kerry also focused a significant amount of his speech on the effect of technology on jobs, noting that “technology ‒ not trade” is the reason the US “hemorrhaged” manufacturing jobs in the first decade of the 21st Century.

“The worst thing I could do is insult your intelligence by pretending that it’s smooth sailing for America and the world,” he said, later adding, “I’m not surprised that a lot of folks want to stop the world and get off.”

Knowing that people are losing jobs due to technology isn’t enough, and the fact that “the same technology that eliminated your job also gave you a smartphone that lets you binge-watch a future that’s out of reach for you and everyone you grew up with” is “zero comfort” for those people, Kerry said. 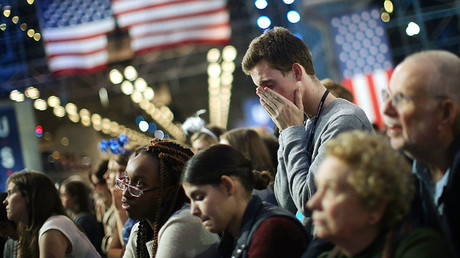 He glossed over the fact that, during the 2016 presidential election, Trump was able to reach those voters in states that had previously voted Democratic, a major reason the Republican was able to flip states like Michigan, Ohio, Pennsylvania and Wisconsin. Instead, Kerry noted that the coming technological changes will make the unsolved jobs crisis in the Rust Belt states of West Virginia and Ohio “look like child’s play.”

“And what concerns me is that if our institutions can’t build consensus and respond to the demand of Americans for jobs today – how are we ever going to do it in a time when artificial intelligence and robotics kick in and five times that number of jobs disappear twice as fast?” he said.

Kerry did offer some praise for Trump however, complimenting the president’s speech in Saudi Arabia on Sunday that called on Muslim nations to “drive out” Islamic extremists, though he argued that education and jobs are the answer to combating terrorism.

At the end of his speech, the former secretary of state urged the graduates to fight for democracy in America and abroad.