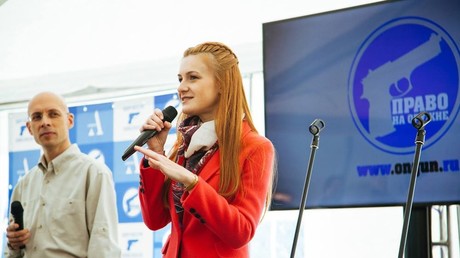 Butina likely pleaded guilty to “very technical charges” as she expected not to “serve prison time” and hoped that she would be “returned to Russia,” Marks said.

The woman, living in the US on a student visa, was detained in July and accused of secretly working for the Kremlin to infiltrate the National Rifle Association (NRA) and establish ties with the Republican Party. The officials in Moscow denied the allegations.

As part of the plea deal, struck this week, Butina admitted to having “sought to establish unofficial lines of communication with Americans having power and influence over US politics,” while doing so on behalf of the Russian government.

Also on rt.com
Maria Butina pleads guilty to US charge of conspiring to act as foreign agent


The deal came after the Russian national spent months in solitary confinement. Speaking to RT, Bruce Marks argued that there was “no safety concern” to trigger such measures against her and suggested it may have been done to “pressure” her into pleading guilty.

Being in solitary confinement is very difficult. She’s alone here in the United States – 22 hours a day in a cell. That’s clearly going to have some impact on her.

The harsh treatment of Butina was earlier denounced by Russian diplomats and the woman’s father, who told RT that it “had a negative impact on her mental and physical condition.”

Also on rt.com
Tormented into a guilty plea? Experts denounce US ‘miscarriage of justice’ in Butina case


Marks, who served in the Pennsylvania State Senate, emphasized that Butina never did things like actual spying or sharing classified materials. “We have a very technical law that says if you’re ‘representing’ a foreign government or an official, you have to register. That’s the technicality she violated,” he noted.

“We’re not talking about Ethel Rosenberg,” the legal expert said, referring to a woman executed in the 1950s for giving away the US atomic secrets and other classified information to the Soviets.

She [Butina] wasn’t a spy. The concept of a spy is someone who’s obtaining secrets from the government. That didn’t happen at all.