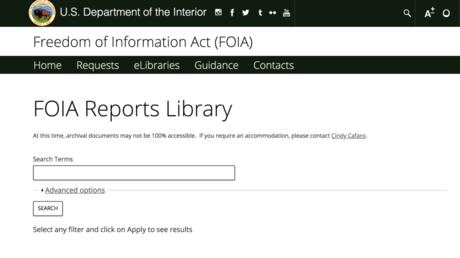 The US Department of the Interior seeks to reserve the right to ignore any FOIA requests from the public that it deems too “burdensome” to fulfil. The move amounts to censorship and is a crackdown on transparency, critics argue.

Claiming that it is overwhelmed by the volume of requests from journalist and the general public, the Department of the Interior proposed revising the regulations on processing records under the Freedom of Information Act.

“The bureau will not honor a request that requires an unreasonably burdensome search or requires the bureau to locate, review, redact, or arrange for inspection of a vast quantity of material,” the proposed new rule reads, adding that the modification is necessary to “best serve our customers.”


While the public has until January 28 to comment on the proposed amendment, the revision immediately raised red flags from government transparency activists and environmentalist groups in particular. Critics accused the department, which deals with the conservation and management of US national parks and natural resources, of trying to hide its cozy relationship with the energy industry.

“It reflects basically the fact that they are trying to run a secret government,” award-winning US journalist Dave Lindorff told RT. “What it is going to do is force people to have to go to court to get action on freedom of information requests which is totally antithetical to open government and what the FOIA was designed to do.”


The agency has seen a 30 percent increase in requests between 2016 and 2018, handling some 8,350 petitions last year, and partially blamed the FOIA’s “varying sets of operating procedures and insufficient levels of accountability” for its inefficiency in processing public requests.

“To best serve customers you hire staff,” Lindorff he added. “These are not classified things that people are looking for. They are open government things that should be freely available and quickly available.”