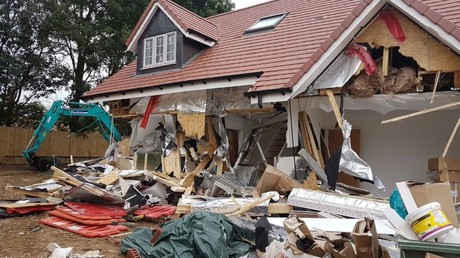 A builder took his angry work outburst to an extreme degree when he used an excavator to destroy a row of newly built houses because he was reportedly upset that he hadn’t been paid for work he had done on the properties.

Daniel Neagu was arrested at the scene and is due in court on Monday. The 31-year-old man has been charged with criminal damage after using the powerful machine to rip the facade off the buildings, in the small English town of Buntingford, on Saturday evening.

Resident Elaine Francois called the police as she watched the incident unfold. “It looks like an earthquake or bomb struck,” the 61-year-old told The Sun. “He was laughing and taking photos of the damage. When police got here he told them he wasn’t paid and that’s why he did it. He was totally calm.”

The row of houses was estimated to be worth around £2.5 million ($3.2mn). Residents said they feared for their own homes as Neagu carried out the destruction. Another neighbor, William Griffiths, confronted him during the rampage.

“He said he wasn’t dangerous but hadn’t been paid,” he said. “He got out of the digger and I thought, ‘Great, he’s stopped’. But he got back to carry on. He seemed happy. When police took him away in cuffs he caused no trouble.”

Hertfordshire Police said it has received a lot of enquiries about the bizarre incident. “The offender is still in custody whilst enquiries continue. More details will be released in due course by our Corp Comms department,” it said. The police added that the man is “potentially a disgruntled worker”.