The British public has lost faith in Theresa May and her ability to carve out a Brexit deal. Yet bizarrely, their overall sense of public well-being has improved since the referendum.

For the first time in a year, the number of people who believe the country is going to the dogs as a result of ham-fisted Brexit negotiations has risen. A poll carried out by ORB International shows two in three are unhappy with the handling of the talks by Brexit secretary David Davis.

The poll of 2,000 people found 40 percent think Britain will be worse off, while 37 percent believe the nation will be better off after Brexit. This is the highest level in 12 months. ORB also found 44 percent of the public backed May at the start of June, while that figure now stands at 26 percent. Older generations are generally more supportive of the PM, figures show. 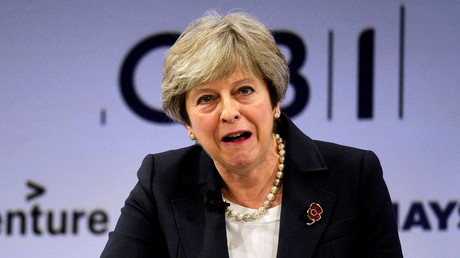 The news comes as talks with Michel Barnier, Davis’ counterpart in Brussels, appear to have stalled – again. The EU wanted to end talks until Britain came up with a sum of money – or divorce fee – to be paid to meet its commitments until 2020. May’s team refused to reveal a figure and the EU was scathing.

May was rolled out in Florence to convince the other side to get back on track, but a dull speech did little to calm nerves and put out angry flames across the bloc. The prime minister has, however, been supported by some, including business people in Germany’s motoring industry, who fear they could lose millions of pounds of business.

The government has been ordered to release studies which were conducted on the impact of Brexit. The results were kept from the public, but after campaigning from opposition MPs Downing Street will be forced to hand them over. Davis is due to issue a written statement to Parliament on Tuesday.

Despite all the doom and gloom on the Brexit horizon, another study has found a significant rise in the population’s feelings of well-being since the referendum last year. In England, voters are much happier, while other parts of Britain remained the same. Northern Ireland’s population reported the highest levels of well-being.

The significant study, which questioned more than 100,000 adults, was released by the Office for National Statistics (ONS). The number of people who reported very high levels of life satisfaction in the 12 months to June 2017 was higher than the previous year.

“Employment and job satisfaction, our health, the quality of our relationships and our financial situation are just some of the aspects of our lives shown to have an effect,” the ONS said. Contributing factors are listed as the employment rate being at its highest level and improvements in gross domestic product per head.

However, real household disposable income per head has fallen for the fourth quarter in a row.