A comprehensive review of the EU-wide response to the refugee crisis conducted by the UK Parliament has blamed European countries for their failures to tackle security issues and called for immediate action to battle the spread of Muslim fundamentalism.

The year-long investigation by the Home Affairs Committee reported that the EU-Turkey agreement which came into force in March as the primary measure to the influx of refugees in Europe at best offers a “partial solution” that raises “serious humanitarian, human rights, logistical and legal concerns.”

Revealing statics, the UK report said that there were 1,255,640 first time applications for asylum in EU in 2015, which has more than doubled from 2014 when 562,680 applications were received. Furthermore, the report estimates that in the first six months of 2016, some 227,316 migrants entered Europe by sea through Italy, Greece, Cyprus and Spain, and nearly 3,000 are thought to have died in the attempt. Libya this year has been the main departure point, followed by Egypt.

“Europe’s efforts to address this ‘colossal’ refugee crisis has been lamentable. The atrocious conditions in migrant camps within and on the borders of the richest countries on earth is a source of shame,” said Keith Vaz, MP, Chair of the Committee.

In this regard, the UK proposes a continuous implementation of effective security checks at EU external borders, which are now greatly hindered by members of the Schengen area who have yet been able to agree on a common policy of border checks.

“Failure to agree on control of external borders is greatly exacerbating the crisis,” the committee said in the press releases, addicting that individual member states border checks within the Schengen area are in “breach of the Schengen principles.”

Calling for a common border external border control policy, the report says that it is “not acceptable” for the EU member states to leave the burden of gatekeeping to the countries most affected by the refugee crisis, namely Italy and Greece.

“All EU national governments should share the burden and contribute to disrupting the activities and destroying the boats and equipment of criminal elements who are the source of much of the migrant crisis, and who are the only party in this crisis to have gained from the suffering of vulnerable people,” the committee said.

In particular, the report calls for the tackling of the migration route at its source, for instance in Libya, where a reported 500,000 people have been waiting to cross the Mediterranean illegally. Noting the UK’s and European involvement in the Libyan civil war, the committee called to set up an aids package to the war-torn country.

“The EU should be able to offer Libya a deal, with substantial funding provided to tackle people smuggling at the points of departure, and access to Libyan territorial waters for European country vessels agreed in return,” it said.

The report also said that terrorists are using the migrant crisis to smuggle extremist elements across to Europe to carry out terrorist attacks on EU soil.

“The appalling attacks in Paris demonstrated that terrorists are exploiting this crisis by using this human tragedy as a cloak to re-enter Europe. The EU external border must improve security, including deploying specialist equipment to fingerprint and check everyone against security databases. This is not happening. Terrorists do not see borders as barriers to their barbarism,” Vaz said. 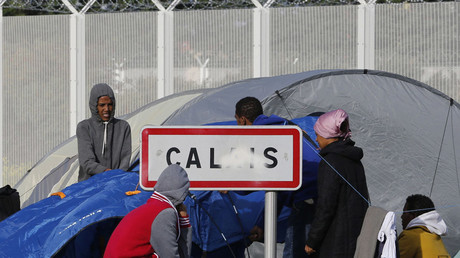 Focusing on the protection of its home shore, the report mentioned efforts to protect those migrants attempting to enter the UK from mainland Europe, mainly the so-called “Calais Jungle” camp in France, where hundreds of illegal refugees try to board lorries and cars passing through on their way to England’s Dover which lies across the Channel Tunnel.

Recognizing that migrants in Calais are entitled to humanitarian protection and that their claims should be processed in the UK, the committee said that much more could be done to bring refugees legally into the UK through family reunion, especially unaccompanied minors. But at the same time, the committee said that it has yet to see “any evidence of a strategy” designed to deliver a long-term solution to the “appalling conditions” found in the makeshift camp on the northern edge of France.

Calling on the creation of secure and safe travel routes into Britain, the committee reported a failure to tackle people-smuggling from France to the UK. The report stressed that smaller ports are now being used by “criminal gangs” to smuggle people into the UK.

“UK Border Force has been given a key role in implementing strengthened coastal security measures but it is clearly under-resourced, with the number of Border Force vessels in operation worryingly low. Royal Navy vessels should be made available to Border Force to make up for shortfalls, where necessary,” the committee said in the press release.

The UK Parliamentary inquiry also defended the 2003 Le Touquet agreement, under which British border guards are allowed to check for illegal immigrants stowing away on lorries, cars, and trains before they head through the Channel Tunnel and onto ferries.

“Maintaining the Le Touquet agreement must be a priority for the UK Government,” the report said. “Those involved in terrorism and criminal gangs do not respect borders and both countries need to be vigilant in confronting these ever-present threats.”

On the domestic front, the report disclosed for the first time the number of Syrian refugees resettled in each local authority area.

“These figures show many Local Authorities (LAs) are not pulling their weight in resettling Syrian refugees, and there is scant evidence that the Government is on track to meet its commitment to resettle 20,000 Syrians by 2020.”