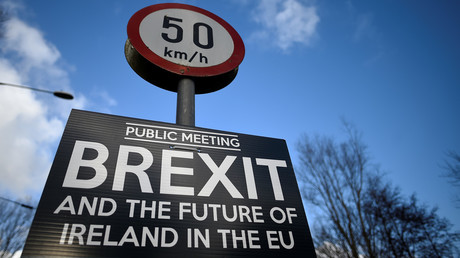 A Conservative Party MP has suggested using the prospect of food shortages to force Ireland to capitulate on the Brexit ‘backstop’ deal for Northern Ireland — and Twitter has let loose with some lessons from history.

In a British government report, leaked to the Times of London, MP Priti Patel suggested that potential food shortages in the event of a ‘no deal’ Brexit should have been used as leverage to force Ireland to give up the ‘backstop’ — an agreed guarantee that there will be no hard border imposed between Ireland and Northern Ireland. If the food issue had been pressed, Patel says, Britain could have gone back to Brussels to “get a better deal.”

Given the history between the two islands, which involved a famine that killed a million people and which many Irish regard as genocide by Britain, it didn’t go down well when Patel suggested using food as a weapon in Brexit negotiations.

Unsurprisingly, Patel was swiftly bashed on Twitter for “profound ignorance” of history.

In Ireland we don’t refer to it as the “potato famine”. The Famine was a result not only of potato blight but also because an imperialist landlord class & govt. chose to let people die. Fast forward to 2018 & we’ve Priti Patel suggesting food blockades against Ireland. Classy. 🤦‍♀️

…and a million dead Irish from The Famine just rolled in their graves, my ancestors anong them. 💀💀💀

One commenter wondered why British politics seemed not to have “moved on since 1847.”

A Tory government threatening Ireland with famine, in the name of free trade dogma. And there was me thinking British politics had moved on since 1847.https://t.co/J43meFcZXd

Some also pointed out that Patel’s own Indian heritage should have made her more sensitive to the results of “using food as a means of subjugation.”

Priti Patel, who’s of Indian lineage and is highly educated, knows the historical result of using food as a means of subjugation. Yet still she suggests threatening Ireland, of all countries, with food shortages as backstop leverage. Classically disinhibited psychopathy. Inhuman

I’m assuming with a name like Patel this lady has Indian heritage.

Ireland isn’t the only place the British empire has used food shortages to subjugate people… Bengal anyone? https://t.co/SjWFDa7uaL

It wasn’t just Irish tweeters who lashed out at Patel, however. Scottish MP Joanna Cherry tweeted that it was“utterly immoral” to threaten Ireland with anything “but particularly” food shortages, while Labour MP Lisa Nandy called Patel’s suggestion “morally reprehensible.”

Sinn Fein president Mary Lou McDonald called on Patel to withdraw the comment from the public record. “They’re not entitled to wreck Ireland. And they need to really grasp and understand that,” she told reporters.

Others chimed in to point out that despite Patel’s claims, according to an annual Global Food Security Index, Ireland has become the second most food secure nation in the world — and exports most of its produce, so it could probably still manage to feed itself in the event of a no-deal Brexit.

The odd thing about Priti Patel remarks is not just the insensitivity of them in relation to Irish history of famine, but that Ireland is a surplus food producer with exports to Britain….