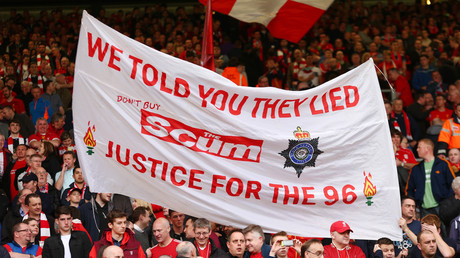 A number of British journalists have hit out at the Corbyn-supporting Momentum group for banning Sun reporters from attending a festival in Liverpool, claiming it’s “censorship” and likening the ban to the actions of Donald Trump.

Journalists from a number of mainstream news outlets reacted angrily to news that The World Transformed (TWT), a festival organised by pro-Jeremy Corbyn group Momentum, has announced that they are banning Sun newspaper journos from attending their event in Liverpool.

TWT cite the false claims made by the Murdoch-owned Sun during its reporting of the 1989 Hillsborough disaster, in which 96 Liverpool football fans were unlawfully killed, as their reason for what they say is a boycott.

Heather Stewart, the Guardian’s political editor, took to social media to claim the ban was “outrageous” and “smacks more of Donald Trump.” The Sun’s political editor Matt Dathan, in a now-deleted tweet, accused Momentum of supporting “press censorship” for showing solidarity with Liverpool and the families of the 96 people killed.

This is outrageous – banning journalists because you don’t like their paper’s editorial line smacks more of Donald Trump than the lovely open, democratic social movement Momentum aspires to be. https://t.co/dM63xr8AR9

You think no Sun journalists have reported from Liverpool since Hillsborough? Won’t be at the Lab conference? The Sun is the biggest selling newspaper in the country – more working class readers than anyone else. To ban it makes Momentum as bad as Trump.

A real shame given how helpful and friendly the organisers were at last year’s event.

Kevin Schofield, editor of Politics Home, in an apparent dig at the proposed Sun ban, remarked on the length of time that has elapsed since the Hillsborough disaster in his tweet on the controversy.

Some on social media have taken issue with the outcry from journalists, backing the move from Momentum which they see as showing respect to the “victims and survivors of Hillsborough.” Ash Sarkar, senior editor at Novara Media tweeted her delight at Momentum’s support for Liverpool’s boycott of The Sun, tweeting: “Justice for the 96, always.”

They are banning The S*n journalists out of respect for the victims and survivors of Hillsborough Heather – as well you know!

Any one that rushes to attack people from Liverpool or events in Liverpool that ban The Sun or for supporting #DontBuyTheSun in the full knowledge that The Sun printed this is not a champion of free press but an apologist for fake news pic.twitter.com/uD48gbFu1u

In 2017, Liverpool FC and Everton FC both decided to enact a boycott of The Sun by banning the paper’s journalists from their stadiums and training grounds, as part of a wider cultural and sporting boycott of the tabloid.

The World Transformed is a political festival that runs parallel with the official Labour party conference. This year’s event in Liverpool will see left-wing French politician, Jean-Luc Mélenchon, and Naomi Klein, the Canadian author and social activist, as its main speakers.