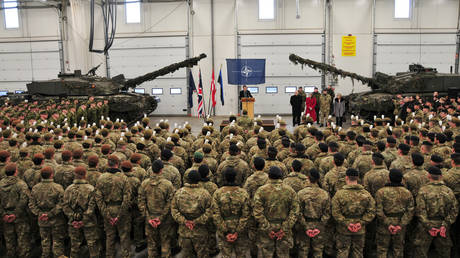 UK Defence Secretary Gavin Williamson has given a wildly optimistic interview, in which he harked back to the historic influence enjoyed by Britain, and promised to build two foreign military bases “in a couple of years.”

“We have got to be so much more optimistic about our future as we exit the European Union,” the Conservative Party minister told the Sunday Telegraph.

This is our biggest moment as a nation since the end of the Second World War, when we can recast ourselves in a different way, we can actually play the role on the world stage that the world expects us to play.

Also on rt.com
Britain’s ‘backyard’? UK wants to deploy 800 troops to defend ‘interests’ in the Arctic


Saying that “if we have economic interests there, we should have a military interest there,” Williamson proposed Singapore or Brunei in the Pacific –on China’s doorstep– as potential sites for a base, while the other would be located in the small South American republic of Guyana, or on the Caribbean island of Montserrat.

Williamson, 42, who was appointed a year ago, couched his aspirations in the language of the Empire, saying he planned to reverse the East of Suez concept, according to which Britain abandoned its attempts to maintain a military presence in Asia after 1968.


Waxing nostalgic about the era and urging his nation to have greater self-belief, Williamson remarked that “the rest of the world saw Britain standing 10 feet tall –when actually we stood six feet tall– Britons saw us standing five feet tall, not the six, and certainly not the 10.”


He added that traditional settler colonies such as Canada and New Zealand, as well as “nations right across Africa… look to us to provide the moral leadership, the military leadership and the global leadership.”

Also on rt.com
‘I hope they check it for sanity’: Russian FM reacts to UK general’s ‘Moscow worse than ISIS’ remark


“They realize that we are good partners and actually the values that we stand for, of tolerance, democracy and justice, these are the values that they hold dear to their hearts,” said Williamson.

Beyond satire. Why do we suddenly need additional overseas bases? Also doesn’t Gavin Williamson realise defence has nothing to do with the EU? https://t.co/7tgwlhMfpM

“Okay we’ll take the photo of Gavin sitting on the table but we’ll need a flag, a telephone, a globe (to indicate global) and a picture of Churchill. That will show them how serious we are about our massive global intentions.” — This clown is dangerous as he is clueless. pic.twitter.com/wBWo0V0d4s

“UK ‘could build new military bases around world after Brexit’

‘This is our moment to be that true global player once more,’ says Gavin Williamson” https://t.co/pHU7L5Rynj