Former London currency trader and Conservative Party Councilor Macer Gifford left his high-flying City career in December 2014 to join the fight against Islamic State. Now he’s returning to Syria, this time at the helm of his own aid organization.

Although hundreds of Westerners have traveled to Iraq and Syria to join jihadist ranks in recent years, throwing in their lot with Islamic State (IS, formerly ISIS/ISIL) and other extremist groups, a smaller, yet significant, number have joined the fight against the Islamists.

Gifford, 30, who has twice traveled to the region to fight alongside the Kurdish YPG, the People’s Protection Units, lacked any formal military training or language skills when he struck out for the frontlines of Rojava – a predominantly-Kurdish region of northern Syria bordering Turkey.

Shocked by the medical situation he found in the areas liberated from ISIS control, Gifford launched the Zurich-based Friends of Rojava Foundation to help restock and rebuild northern Syria’s shattered health system.

“The ambition really is to become one of the major suppliers of humanitarian aid, or particularly hospital aid, in all of Syria,” Gifford told RT’s Rob Edwards.

“Very soon I’ll be reaching out to the Russian government to get them to help me transfer equipment directly to their airbase within Rojava in Qamishlo and really trying to create more of a dynamic relationship on a human level between the Kurdish people fighting in northern Syria and the Russian government, and that would have huge implications for my charity.”

Gifford describes his journey from the world of finance to combat and advocacy work.

“The story begins at my desk,” said Gifford.

“It begins with a job that involves a huge amount of studying. The one thing that moves the currency markets is politics. And the events of the summer of 2014 were shocking everyone to their core and were making markets quite volatile.

“My days were spent, for hours at end, reading newscasts and news articles about what was going on in Syria and Iraq. And just watching the people surrounded on Sinjar Mountain, just watching the events in Kobani with the heroic liberation movement fighting for survival, it really inspired me and it became an obsession.”

The violent extremist group calling itself Islamic State was relatively unknown beyond foreign policy and intelligence circles before summer 2014. But the group’s rapid advance across both Iraq and Syria, its attacks on the Yazidi population and execution of journalists and aid workers hammered Abu Bakr al-Baghdadi’s millenarian movement into the public consciousness.

“With all those journalists sitting and being murdered on their knees in orange jumpsuits, watching women being carted off and to be sold into sexual slavery, these images were just probably the most foulest and horrendous – it was an act of genocide, basically, and no one was really talking about it.”

It was this sense of frustration at government inaction that eventually drove Gifford to get involved.

“Britain and America didn’t have a coherent strategy to get rid of ISIS, they didn’t know what their response should be, and I felt that as a citizen – as a civilian who goes out there, joins the people that are suffering the most – if I could learn from them and explain and articulate to the West what they’re fighting for, then maybe something good will come out of this. So, I almost consider myself more of an educator than a fighter.”

Although Gifford says he discourages other Westerners from following in his footsteps – those like Ryan Lock, the third British volunteer killed while fighting alongside the YPG in December last year – he insists they are fighting a moral cause.

“Of course Ryan’s presence there, it’s not for me to say yes or no whether he should be there. We’re all on our own journey, we’ve all gone there for our own reasons … it would be ridiculous of me to say that he shouldn’t have been there.

“I saw the movement there as a fight between good and evil, between democracy and fascism, very much like the civil war in Spain in the 1930s.

“I made contact with the YPG on Facebook, they told me to fly to Sulaimaniya, where I would be met by someone who would facilitate my transfer across the border, and so in December 2014 I left my home and just went for it. And it was probably one of the best decisions I’ve ever made.” 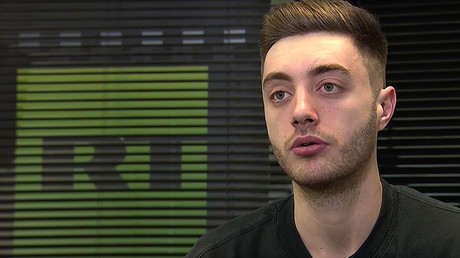 Besides risking their lives by entering active warzones, often without any formal military training, foreign fighters also risk arrest under counter-terrorism laws on their return home to Britain.

“Any extremist needs to be in prison, and I’ve got a very hard view on this. In fact, anyone who goes and actually sets foot on a plane, never mind actually physically gets to Syria, belongs in a jail cell, because the very moment you get on that plane, you’ve attempted murder, you’re trying to assist in what these people are doing out in Syria.