Sir Jim Ratcliffe, Britain’s richest person and a leading business cheerleader for Brexit, is to leave the UK for Monaco to save tax on his £21bn fortune – despite previously saying Britain would thrive outside the EU.

Ratcliffe, the boss of petrochemicals company Ineos, which has sales of $54bn, is making preparations to upsticks and move to the tax-free principality of Monaco to avoid UK taxes on his sizeable wealth – estimated at £21bn, reports The Guardian.

The impending move for Britain’s wealthiest person will no doubt come as a surprise, particularly to fellow ardent Brexiteers, having previously intimated that the UK would thrive post-Brexit as a “perfectly successful” as a standalone country.

READ MORE: From ‘taking back control’ to stockpiling food, Brexit bravado has become a whimper

In an interview with Business Insider in 2016 he insisted: “My confidence in the UK has not diminished following the June 23 vote in favour of Brexit. Quite the contrary, I feel the climate for growth and business is very favourable…Britain is a good location to ensure both of these goals.”

The tycoon, who in the last couple of months has been knighted by the Queen for “services to business and investment,” seems to have changed his tune on Britain’s prospects after leaving the EU bloc in March 2019.

Britain’s wealthiest man Sir Jim Ratcliffe, one of the few businessmen backing Brexit leaves the UK to move to Monaco. So perhaps post Brexit Britain will not be the land of milk and honey as promised? https://t.co/gexw9tVHRW

In an interview in April this year with the Sunday Times to celebrate his success as “Britain’s most successful businessman,” Ratcliffe said: “What’s the reason to invest in the UK? Our skills are not great. We’ve got to deal with unions. We’re isolated from Europe. We’ve got logistical costs.” 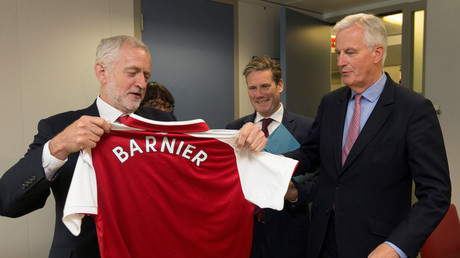 According to the paper, a spokeswoman for Ineos declined to comment on his decision, saying it was a “personal matter” for the multi-billionaire. The company would only state that Ineos was “committed” to its business base in Britain and was looking to keep its HQ in London “for the foreseeable future.”

It’s not the first time Ratcliffe has quit Britain. He relocated Ineos to Switzerland in 2010 in protest at the then-Labour government imposing a harsher tax regime for corporations. The move saved an estimated €450m (£405m) in tax. When the Conservatives returned to power and cut corporation tax from 28 percent to 20 percent, Ratcliffe moved the company back to the UK in 2016.

Britain’s richest man is said to own a superyacht, Hampshire II, which features a “beach club,” and a helicopter pad that can be transformed into a playing field for ball games. Lucky guests to the luxury yacht can enjoy sliding down a zip-wire from the crows’ nest down into the sea. It has a crew of 21 and cabins for 14 guests, according to The Guardian.

Ratcliffe was named Britain’s richest person in May after he contacted the Sunday Times editor of the rich list to complain that his wealth had been dramatically underestimated.