The biggest warship in Royal Navy history debuted on Wednesday morning as she sailed into her home port at Portsmouth. HMS Queen Elizabeth, and her incomplete twin HMS Prince of Wales, however, are beset with technical and security issues.

The 65,000-tonne aircraft carrier, which cost the UK an eye-watering £3 billion, was hailed by Defense Secretary Michael Fallon as a “demonstration of Britain’s military power” and something international powers would envy. 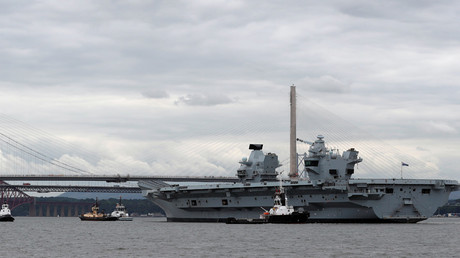 But the carrier’s construction has been met with a wave of criticism over its security and capabilities, with one senior military figure anonymously telling the Guardian in 2015 the ship is merely a “combination of naval vanity and pork-barrel politics.”

Security concerns about the HMS Queen Elizabeth were recently raised as it was reported that the 280-meter-long carrier operates with outdated Windows XP software, which has not been reviewed by Microsoft since 2014, and could therefore be an easy target for hackers.

“If XP is for operational use, it is extremely risky,” Professor Alan Woodward, an

IT expert at the University of Surrey, told the Times.

“Why would you put an obsolete system in a new vessel that has a lifetime of decades?”

The software is the same used by a number of National Health Service (NHS) hospitals, which were struck by a massive cyber-attack earlier this year.

The obsolete technology was also slammed by a former head of military IT.

“You need enough capacity to communicate with all of the other platforms: ships, aircraft and headquarters,” General Sir Richard Barrons told the Times.

“[HMS Queen Elizabeth] may look impressive as a ship but technologically it’s stuck 10 years ago.” 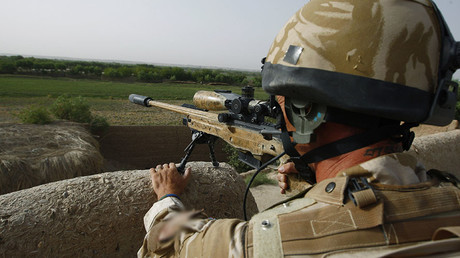 Scottish port of Invergordon in July.

A photo enthusiast claims he did not intend to land his drone on the carrier, but was forced to direct it aboard because of bad weather conditions.

He told the BBC: “I could have been anybody… I could have carried 2 kilos of Semtex [plastic explosive] and left it on the deck.”

Sir Michael Fallon says HMS Queen Elizabeth will spearhead the “return of Britain’s military power.” How it will achieve this without fighter jets on board, however, remains unanswered.

But according to aviation expert Pierre Sprey, the aircraft have an “unbelievably abnormal” amount of issues, including computing systems that are vulnerable to cyberattack and communication issues between the planes and ships. 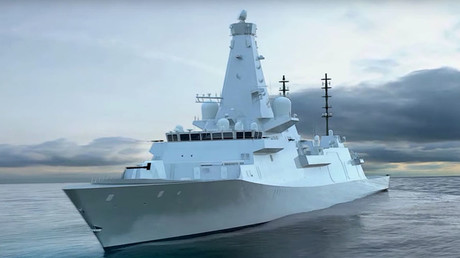 The F-35 is extremely advanced in transmitting data, but many ships lack the means to receive it, says Sprey. In fact, HMS Queen Elizabeth has weaker Wi-Fi connectivity than the combined signal of two domestic households.

“Maneuverability is appallingly bad. It has terrific problems trying to fly fast at low altitude. It overheats, and when you detect the overheating, you have to open the bomb bay doors to cool the missiles that are inside,” Sprey added.

There are also worrisome claims that ‘HMS Queen Elizabeth’ could be easily sunk by a volley of comparatively cheap missiles.

“Missiles costing (much) less than half a million pounds a unit could at least disable a British aircraft carrier that costs more than £3 billion,” a report by the Royal United Services Institute (RUSI) security think tank suggests.

“Indeed, a salvo of 10 such missiles would cost less than £3.9 million.

“It has become much cheaper to destroy major systems and platforms than to develop and build them, making large-scale attacks on a single target more likely,” the report argues.

The authors said the UK and its allies face an “increased peer and near-peer threat from Chinese and Russian long-range precision missiles, which threaten large land, maritime and air platforms.”

Commenting on the UK’s flagship, the Russian Defense Ministry compared the carrier to a queen bee, suggesting it is powerless without a military armament surrounding it.

“In the same way as bees, the British aircraft carrier alone is only able to release aircraft from its belly, while she is densely surrounded by a hive of warships, logistics vessels and submarines protecting her.”