Britain could end up with a navy like a “Third World nation” unless ministers commit to further funding, a former head of the Royal Navy warns.

Admiral Sir George Zambellas told the Sunday Times that after years of austerity, the Royal Navy has been “hollowed out” in terms of resources. 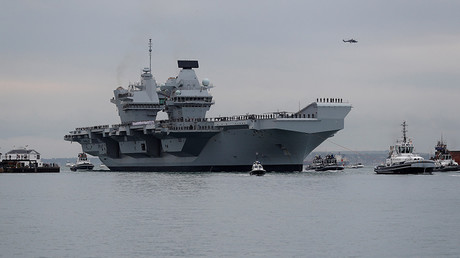 Speaking out about the “capability gaps” of the navy, the retired first sea lord called on the government to invest more on its fleet, otherwise Britain’s security strategy would be severely compromised.

“You have a choice now. You either put more money in or you stop doing serious things and disappear into a Third World nation, security-wise, even though we are spending billions on defense,” said Zambellas, who won a Distinguished Service Cross in 2001 for his command of a warship during Britain’s intervention in Sierra Leone.

After 37 years of cuts and a substantial lack of resources, the navy is at the “bottom of the efficiency barrel and we all know that,” he added.

As an example of how the navy is being stretched beyond capacity, Zambellas pointed to the UK’s struggle to help people left stranded by Hurricane Irma in the British Caribbean islands last week.

Although the Royal Fleet Auxiliary Mounts Bay was in position to help with rescue operations, a second ship, HMS Ocean, only left Gibraltar last Tuesday and is not expected to arrive until the end of this week.

“While our men and women have done a fantastic job, the reliance so far on a single Royal Fleet Auxiliary ship shows just how stretched the global post-Brexit navy is going to be,” said Zambellas.

If Britain’s Navy did become ‘Third World’, it would be the only Third World force to have just spent £6 billion (US$8.13 billion) on two new aircraft carriers, HMS ‘Queen Elizabeth’ and its partner HMS ‘Prince of Wales’.

The Royal Navy called the new ships “four acres of sovereign territory deployable across the globe.”

Its striking potential has also been called into question after it was claimed that its  138 US-built F-35 fighter jets, which have cost £150 billion (US$196 billion) have an “unbelievably abnormal” amount of issues.

The Admiral’s claims are even more striking in light of the fact that while the UK spent more than $58.6 billion on its military, Algeria, an actual third-world country, invested only $10.6 billion, according to the Stockholm International Peace Research Institute.

A senior Ministry of Defense (MoD) source contested the claims, arguing Zambellas  himself should be held to account as “many of the challenges the navy faces today can be traced back to the decisions of the first sea lord.

“His criticisms come from someone who lives in a glasshouse.”

An MoD spokesperson said, “Our budget is growing and, for the first time since the Second World War, so is our Royal Navy.

“Our Navy can already carry out all its operational requirements, but with two types of brand new frigates and two huge aircraft carriers in the pipeline, the UK is fulfilling its global maritime role.”