Boris Johnson condemned Iran for reportedly launching missile attacks against Israel in the occupied Golan Heights, despite claims in Syria that Israel initiated a tit-for-tat exchange with airstrikes on Tuesday.

Israel said 20 rockets were fired at their military positions in the Israeli-occupied territory between north-eastern Israel and south-western Syria. Israel says it retaliated with airstrikes overnight, claiming they took out “nearly all” of Iran’s military sites in Syria. “We hit nearly all the Iranian infrastructure in Syria,” said Israeli Defense Minister Avigdor Lieberman.

“We urge Iran to refrain from further actions which will only lead to increased instability in the region. It is crucial to avoid any further escalations, which would be in no one’s interest.”

It was a seemingly firm statement from Johnson, but he offered no response to claims that Israel had attacked Syria, targeting Iranian positions near the capital Damascus the day before. A number of sources often cited by the UK government said the Israeli strike hit an Iranian arms depot. 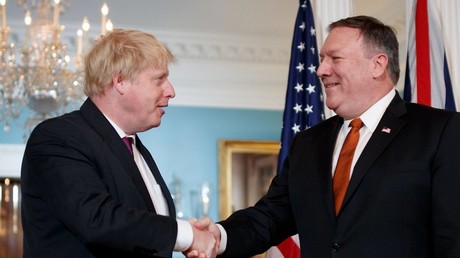 When asked about the claims, an Israeli military spokeswoman said: “We do not respond to such foreign reports,” stated Lebanon’s Daily Star. The Independent reported that nine people are thought to have been killed by the Israeli airstrikes, including Hezbollah militia fighters and members of Iran’s Revolutionary Guard.

In the wake of these claims, there have been questions as to why the British government regards Israeli actions as retaliation, when it appears that Iranian forces were the first to be targeted in an apparent tit-for-tat exchange.

The first alleged Israeli attacks on Iranian military positions in Syria this week occurred just hours after President Donald Trump announced that the United States would be pulling out of the historic 2015 Iran nuclear deal.

Israeli leader Benjamin Netanyahu had recently staged a presentation to tell the world that “Iran lied,” actively pursuing nuclear weapons contrary to the commitments of the Iran deal, illustrating his points with super-sized letters – just in case his audience didn’t really get the scale of the accusations. Few were left wondering who Bibi was targeting with the childish slides.

There appears to be a perfect dovetailing of Trump and Netanyahu when it comes to their positions on Iran and Syria, operating seamlessly over the last few weeks.

The surge in tensions between Israel and Iran-Syria will be seen by many as a worrying development. It is reportedly the first time since 1974 that there have been military clashes over the Israeli-occupied Syrian territory of the Golan Heights.