President Donald Trump is counting on bipartisan support for his tax reform plan, which he says will boost the economy and the middle-class. And, he may be in luck, as Democratic lawmakers facing reelection in states Trump won feel the political pressure.

At a manufacturer in Springfield, Missouri, Trump told an audience of supporters that he was going to bring back Main Street with a tax plan that he said is “pro-growth, pro-jobs, pro-worker and pro-American.”

“We’re here today to launch our plans to bring back Main Street by reducing the crumbling burden on our companies and on our workers,” Trump said. “The foundation of our job creation agenda is to fundamentally reform our tax code for the first time in more than 30 years.”

Trump urged members of Congress to get behind his efforts, saying that this is a “once in a generation opportunity to deliver real tax reform for everyday hard-working Americans.”

“I don’t want to be disappointed by Congress. Do you understand me?” Trump said to the cheering crowd. “I think Congress is going to make a comeback. I hope so. I’ll tell you what, the United States is counting on it.”

‘I do not want to be disappointed by Congress. I think Congress is going to make a comeback… the United States is counting on it’ – Trump pic.twitter.com/B7pD7Ie8gg

While calling for bipartisanship, Trump told his audience that if Senator Claire McCaskill (D-Missouri) did not support his proposals, they should vote her out of office.

“We must lower our taxes and your senator, Claire McCaskill, she must do this for you, and if she doesn’t, you have to vote her out of office,” Trump said. “You can’t do this anymore with the obstruction and the obstructionists.”

On Sunday, Trump tweeted that McCaskill, who faces reelection in 2018, would lose her seat to a Republican because she “is opposed to big tax cuts.”

I will also be going to a wonderful state, Missouri, that I won by a lot in ’16. Dem C.M. is opposed to big tax cuts. Republican will win S!

However, Trump’s wish for bipartisan support could be answered, as some Democrats are facing tough 2018 reelection races in states Trump won.

The White House is reportedly looking to gather support from three Democratic senators who will face reelection bids in states that Trump won by large margins.

On August 1, nearly every Democratic senator signed a letter to the Trump administration, listing the changes that had to be made to the proposed tax reform plan in order to gain their support. Senators Joe Donnelly (D-Indiana) Heidi Heitkamp (D-North Dakota) and Joe Manchin (D-West Virginia) were the only three members who broke with the party line and refused to sign the letter.

One White House official told Politico that if Democrats don’t help them, “it could end up hurting them in the 2018 midterms.”

Under his plan, Trump said the tax would be simple, fair and easy to understand. In order to achieve this, Trump said he would get rid of loopholes, reduce the number of tax brackets, and lower rates. 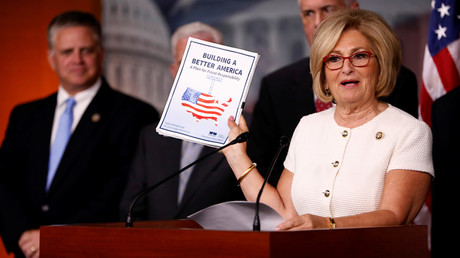 Trump cited the fact that there has not been a major rewrite of the tax code since 1986, when former President Ronald Reagan was in office. Since then, Trump said the tax code has tripled in size to 2,600 pages. He said that more than 90 percent of Americans need professional help to do their taxes because the rules are “not understandable.”

Trump also called for a competitive tax code that creates more jobs at higher wages for more Americans. Trump said the US has fallen behind other countries and proposed cutting business tax down to 15 percent.

“America must lead the way, not follow from behind,” Trump said. “We have totally surrendered our competitive edge to other countries… We’re not surrendering anymore!”

The president then called for tax relief for middle-class families in order to reduce the costs of child care and raising a family.

“We want to help them take home as much of their money as possible,” Trump said.

Finally, Trump said his plan would bring back trillions in wealth parked overseas. Under his proposal, he said companies would be incentivized to return 3-4 trillion dollars to the US that has been kept overseas.

While Trump said that his proposal would benefit the middle-class, many Democrats disagree.

“Under this plan, the richest Americans would become even richer at the expense of middle-class families,” Perez said in a statement obtained by CNN.

Senate Minority Leader Chuck Schumer (D-New York) accused Trump of using populism to sell his tax plan, adding Democrats are ready to fight him over the coming months to stop his proposals from becoming law.

“If the president wants to use populism to sell his tax plan, he ought to consider actually putting his money where his mouth is and putting forward a plan that puts the middle class, not the top 1 percent, first,” Schumer said in a conference call, according to the New York Times. “This is going to be one of the biggest fights of the next three, four months, and Democrats are ready for it.”

Most Republicans came out in support of Trump’s proposals, with Speaker of the House Paul Ryan (R-Wisconsin) saying Wednesday that Congress is “united in our determination to get this done.”

“We’ve made it clear that our top priority this fall is reforming the tax code and cutting people’s taxes,” Ryan said in a statement.

Thank you, Mr. President, for calling for a level playing field for American workers & job creators. The time for major tax reform has come.

House Ways and Means Committee Chairman Kevin Brady (R-Texas) released a statement saying that he was “encouraged” by the president’s proposals.

“He explained clearly today why Washington must act now on pro-growth tax reform that will create jobs, grow paychecks, and improve the lives of all Americans,” Brady said in a statement. “The Ways and Means Committee is ready to work with the president and deliver on this important priority this year.”

Several other Republicans and conservative groups came out in support of Trump’s proposals, tweeting their support just after his speech.

.@POTUS is absolutely right. We need #TaxReform that lets families keep more of their hard-earned money.

.@POTUS is right, we’ve completely surrendered our competitive edge. We need #taxreform so American businesses are on a level playing field

Happy to work w/ @POTUS & across the aisle to create a fair tax code to create more jobs & allow people to keep more of their money.