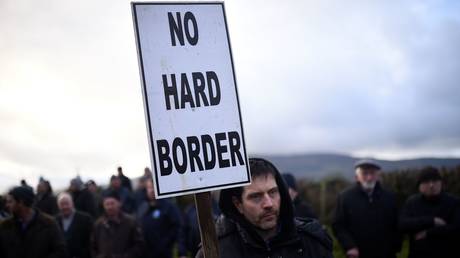 Prime Minister Theresa May could be handed a lifeline to get her Brexit deal through Parliament on Tuesday, as Tory Brexiteers set up a vote to remove the controversial Irish backstop.

Sir Graham Brady, chair of the influential 1922 Committee (responsible for hiring and firing Tory leaders) has tabled a Commons motion which would scrap the contentious Irish backstop, in a bid to get a Brexit deal through Parliament.

Brady’s amendment states that the House of Commons is willing to vote for May’s deal on the condition the backstop is “replaced with alternative arrangements to avoid a hard border.” The Tory grandee claims this would give the Prime Minister “enormous firepower” to renegotiate her Brexit deal with the EU.

Also on rt.com
‘Door open but your mind is closed’: Corbyn lays into May over Brexit redlines at PMQs


Numerous media outlets are reporting that the government could be tempted to vote for Brady’s amendment if House Speaker John Bercow selects it to be voted on. There have been 14 amendments tabled on May’s deal, with half a dozen expected to be chosen by the speaker.

A spokesperson for the prime minister told reporters on Monday that changes would have to be made to the Withdrawal Agreement, including the backstop, as it had been “rejected by MPs by a significant margin.”

It’s not clear whether Brady’s amendment will get the necessary backing from MPs with a number of Tory Brexiteers lukewarm to the proposal.

This is a great description of the ERG, and goes some way to explaining why even if the likes of Bernard Jenkin and IDS are lukewarm about the Brady amendment, it may still get some ERG support. https://t.co/fIFJPjjG7u

Fair few of the ERG come out against the Brady amendment. Can only see that making Cooper-Boles more likely. ERG appear to be splitting

The other key amendment that could be voted on during proceedings on Tuesday is backbench Labour MP Yvette Cooper’s proposal, which requires May to delay Brexit and extend Article 50 if she has not got her deal voted through by MPs by February 26. The main purpose of Cooper’s amendment is to avoid a no-deal Brexit.

NEW: Bosses of Sainsbury’s, ASDA, M&S, Co-op, Waitrose, KFC, Pret, Lidl, McDonald’s, Costcutter and the British Retail Consortium write to MPs warning about the dangers of a no-deal Brexit for choice, quality and cost of food.

It comes as chief executives of some of the UK’s leading food retailers, such as Sainsbury’s, ASDA, M&S, Co-op, and Waitrose, as well as Pret a Manger and McDonald’s, have written a letter to MPs warning them about the consequences of a no-deal Brexit for cost, choice, and quality for the consumer.