This Presidential election will go into the history books.

Trump has inflicted a huge loss on the American Establishment. At one point, Dow Jones futures were down 900 points. He has inflicted a setback to the New World Order. The New York Times ran an article on this, written early in the morning. Headline: Donald Trump’s Victory Promises to Upend the International Order.

JERUSALEM — Donald J. Trump’s stunning election victory on Tuesday night rippled way beyond the nation’s boundaries, upending an international order that prevailed for decades and raising profound questions about America’s place in the world.For the first time since before World War II, Americans chose a president who promised to reverse the internationalism practiced by predecessors of both parties and to build walls both physical and metaphorical. Mr. Trump’s win foreshadowed an America more focused on its own affairs while leaving the world to take care of itself.

The outsider revolution that propelled him to power over the Washington establishment of both political parties also reflected a fundamental shift in international politics evidenced already this year by events like Britain’s referendum vote to leave the European Union. Mr. Trump’s success could fuel the populist, nativist, nationalist, closed-border movements already so evident in Europe and spreading to other parts of the world.

The British Establishment did not see Brexit coming. It came anyway, and for the same reasons. The long-dismissed little people said: “Oh, yeah? You and who else?”

The European Union has yet to sort out the ramifications of Brexit. Now there is Brexit II.

The editors at Google News could not bring themselves to admit this. At 3:25 a.m., EST, Google’s gatekeepers ran as its lead story a series of articles on the Senate race. Look down two headlines.

This was no mistake. At 3:36 this was the arrangement. Google substituted a story on Mike Pence for the story on the newly elected President. 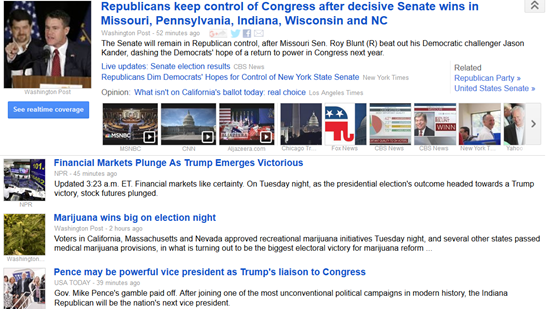 Either the editors did this or else Google’s algorithm is programmed Democratic.

Last week, I added a lesson for my American history course for the Ron Paul Curriculum. There are 180 lessons. This revised lesson is in between “Internet/Web” and “Election of 2000.” I had to revise my lesson plans to make this change. Guess what the new lesson is.

In that lesson plan, I offer this assessment:

“One of the interesting things we’ve seen in this campaign [2016] is FOX has driven Trump’s candidacy less than Matt Drudge,” the legendary journalist said Wednesday on CNN. “Drudge is really great new factor in this election in terms of media. He is — Drudge, that site has been unapologetically in Trump’s pocket from the beginning. And I would say a large measure of why Donald Trump is the nominee goes to Matt Drudge in much the way that FOX has — when you use the word kingmaker, I’m not sure it goes quite far that way, but it is an influence unequalled.” — Carl Bernstein

Drudge is the most important journalist in American history — maybe world history.

He got a President impeached. That had happened only once before: President Andrew Johnson. Hillary then spoke of “a vast right-wing conspiracy.” Little did she know.

It looks as though Hillary will win the popular vote. It’s 2000 all over again . . . but with no need to bring in the Supreme Court to settle it.

I had hoped it would be the other way around Trump with the popular vote, Hillary with a narrow victory. I wanted her to come into the office with little legitimacy and half the electorate vowing to get even in 2020.

Here is my concern. I think the next recession will take place before the next Presidential election. I think it will be worldwide. It will be the product of Keynesian central bankers. It will be a manifestation of the Austrian theory of the business cycle. Central banks inflate. Then they stop. Then the recession hits.

This is going to be a deep and long recession. I wanted Hillary Clinton and the Democrats to take the hit. Now it will be Trump and the Republican Party.

I fear a political sweep in 2020 comparable to Franklin Roosevelt’s in 1932.

There will be no place for the Republicans to hide in 2020.

I have two words with which to scare you. They scare me: Elizabeth Warren. She is the most likely candidate to pick up the pieces. She will become the first female American President.

The recession is in the pipeline. It has been over seven years since the recovery officially began. The likelihood of another four years of the boom is low. If it happens, then it will hit in Trump’s second term, if he gets a second term.

The media will be on his case for four years, starting today. Their rage will be total. They did their best to destroy him, but he won. He allowed the voters to poke a stick in their collective eye. They know they were the target. They will not forgive and forget.

The Best of Gary North