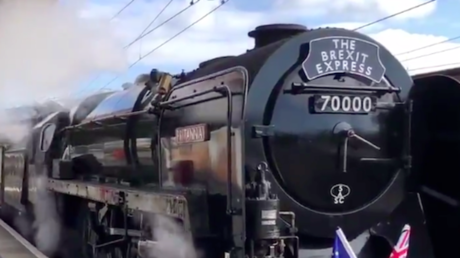 Video of a Brexit Express train driving backwards out of a train station is being celebrated online as the perfect metaphor for the debacle that is the UK’s exit from the European Union.

Footage of the Brexit Express steam engine train was shared by Steve Baker MP, who said he was “delighted to join” the Brexit Express group, a pressure group that is pushing for the UK to actually leave the EU as promised following the 2016 referendum.

The Brexit Express, or Britannia 7000, is a steam engine train that Brexiteers arranged to travel from Swansea, Wales to Sunderland, England to celebrate Brexit and set off on March 30, the day after the UK was meant to leave the EU.

Theresa May’s government is unable to move forward with a Brexit deal, despite the initial long-awaited exit date of March 29 passing, and social media users were quick to point out the similarities between the train and the state of Brexit negotiations.


Many on Twitter trolled Baker over his cheery tweet considering the train was moving backwards, much like the progress of Brexit. Others pointed to the similarities between the old steam engine train with nostalgic appeal and the push to leave the EU.

So let me get this straight, your “brexit express” is a steam train, going backwards, with an EU flag on the front, Steve? pic.twitter.com/Q2G3GwITsy

It’s going backwards and is a relic of a past century. Perfect metaphor for Brexit.

An archaic machine from 1951 that can’t deliver anywhere near as well as the trains we already have, costs a fortune to run and blocks the line for the faster trains behind it?

An accurate metaphor for Brexit – something that’s going backwards, is outdated and only has nostalgia appeal.

produces a lot of hot air too!

A steam train: romantic, iconic, defunct, bad for the environment, a nostalgic, smoke-billowing relic of yesteryear that is infinitely less cheap and practical than people recall. How apt.