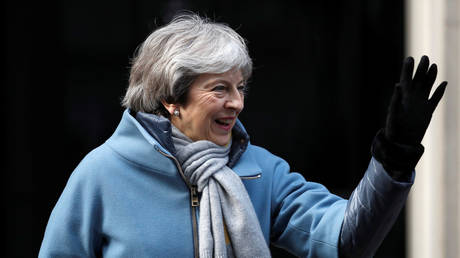 After repeated failures to get her EU divorce deal ratified in the British parliament, Prime Minister Theresa May is expected to request a short delay to Brexit on Wednesday afternoon, just nine days before the March 29 deadline.

It has been nearly three years since the United Kingdom voted to leave the European Union, and two years since May herself set the March 29 deadline to formally exit the bloc. Now, she is expected to write a letter to European Council President Donald Tusk to formally request a delay, a move that will surely cause disquiet among Brexiteers.


Since the withdrawal deal was agreed between May and the EU back in November, the deal has twice been rejected by parliament, leaving the prime minister humiliated and, seemingly, on the brink of being ousted as leader.

May has alluded to a delay extending beyond June 30 if parliament does not ratify her deal. This would require the UK to participate in June’s European Parliament elections, which could further delay proceedings, increasing the likelihood of yet another round of re-negotiations or possibly even a second referendum.

“There will be no renegotiations, no new negotiations, no additional guarantees in addition to those already given,” European Commission head Jean-Claude Juncker said. “We have intensively moved towards Britain, there can be no more.”