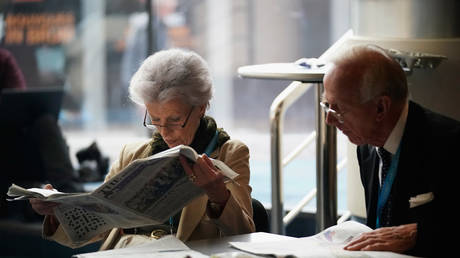 As expected, all of the UK newspapers are leading with coverage of the British Parliament’s final vote on Prime Minister Theresa May’s Brexit deal which many expect will fail.

The House of Commons vote on the EU Withdrawal Bill is predicted to result in a resounding beating for May, as Brexiteer Tories and Pro-EU Remainers alike remain disgruntled with the PM’s efforts.


The vote may well become a historic one in British politics, with votes against the deal potentially topping the 166 recorded against the first Labour government way back in 1924, the worst defeat in a comparable vote in British parliamentary history.

The vote may well become a historic one in British politics, with votes against the deal potentially topping the 166 recorded against the first Labour government way back in 1924, the worst defeat in a comparable vote in British parliamentary history.

The Independent has framed today’s vote in a lengthy series of doom and gloom statistics about Theresa May’s time at the helm of Brexit negotiations and asks, “Will more than 100 of May’s own MPs vote against her?”

Meanwhile, the Times is already predicting a no confidence vote to be put forth by Labour leader Jeremy Corbyn as early as Wednesday.

The Telegraph leads with the angle that this vote will truly mean ‘sink or swim’ for Theresa May, reporting on cabinet minister speculation that if she suffers a large enough defeat, she could well resign.

The Guardian warns of an impending “crushing defeat” for the embattled and beleaguered prime minister, predicting somewhere in the region of 200 MPs will vote against May’s widely criticized deal.

“History will ask… did we deliver Brexit?” is how the Metro has chosen to frame their headline, playing up the intergenerational consequences of the Commons vote.

The Financial Times opts for the personal and professional humiliation angle in framing their headline ahead of the vote which may well prove to be the nail in the coffin of the current PM’s tenure.

Meanwhile The Sun’s front page was dominated by a story that Prince Harry meditates every day as part of his preparation to become a father.

Theresa May only got a sidebar on the front of the UK’s most read newspaper. The article predicts that the Prime Minister will attempt to force a second vote soon if Tuesday’s vote fails.