Police are searching for three suspects after a confrontation between transgender activists and radical feminists in September turned violent. A 60-year-old woman suffered facial bruises after being repeatedly hit and thrown to the ground in Hyde Park.

The Metropolitan Police are seeking a man, and two others, believed to be transgender, over the incident at Speaker’s Corner on September 13. The male is described as 6ft tall (186cm) with brown hair in a ponytail. Officers did not provide genders for the other two suspects, describing one as white, 5ft 7in, of a slim build and with brown chin-length hair, tipped blond. The other is described as being around 5ft 8in, also of slim build and with short blond hair.

A video of the event published on social media shows the alleged victim, Maria MacLachlan, filming transgender activists who had reportedly gathered to protest a talk titled ‘What is Gender? The Gender Recognition Act and Beyond’.

The trans activists are seen carrying signs featuring the acronym TERF – trans-exclusionary radical feminists – and heckling the attendees before the incident broke out.

violence against terfs is always self defense. it does not matter who “instigated” a particular altercation, fascism is inherently violent.

The incident comes as tensions between certain feminist groups and trans groups, respectively, continue to rise. Trans-exclusionary radical feminists believe that trans women shouldn’t be afforded the same rights as those born female. 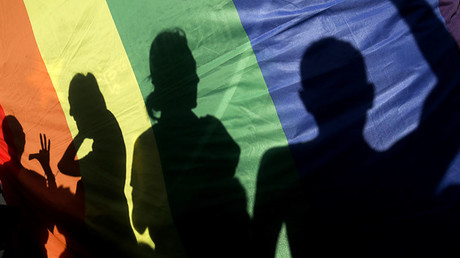 Following the incident the Edinburgh branch of the Action for Trans Health published tweets in support of the violence, writing “punching Terfs is the same as punching Nazis. Fascism must be smashed with the greatest violence to ensure our collective liberation from it.”

Earlier in October, feminist author and activist, Germain Greer – who has previously stated that “Just because you lop off your d**k and then wear a dress doesn’t make you a f***ing woman” – attacked a women’s college at Cambridge University for changing its rules to ensure that transgender women are welcome.

Greer has often spoken out against transgender women, stating they suffer from a “delusion” and are “some kind of ghastly parody” because they don’t have a “big, hairy, smelly vagina.”