Terrifying CCTV footage shows the moment a box of 70 fireworks explodes in a pizza takeaway and delivery restaurant, forcing employees to run for cover.

The incident happened at the Hello Pizza in Kirkdale, Liverpool, on Monday night.
A hooded man is seen placing the ignited box in the shop doorway and running away.

The workers throw themselves over the counter and take cover at the back of the shop.

The fireworks then engulf the takeaway shop with smoke at one point blocking the view of the CCTV camera. 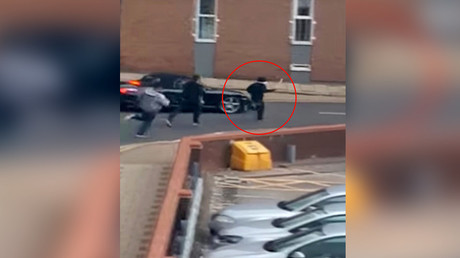 Although no one was injured, employees at Hello Pizza were left shaken, with one refusing to return to work on Tuesday afternoon.

The manager, who wishes to remain anonymous, said the thugs may have planted the fireworks in retaliation for the takeaway workers reporting to police that a shotgun pellet was found in a pizza box on Saturday night. He said shots were fired outside the shop on Stanley Road at about 21:30 local time on Saturday evening.

“We had to ring the police and report it otherwise our insurance would have been invalidated,” the manager told the Liverpool Echo.

“Those involved must have seen that as us giving them up to the police and attacked us in this way to show us that.

“We are just trying to run our business and earn a living and now my staff are too frightened to come to work.”

A Merseyside Police spokesman said: “Police are investigating after reports of criminal damage in Kirkdale at around 9.30pm on Monday.

“It is believed that a man put a firework in the entrance of Hello Pizza on Stanley Road and the firework went off, causing damage but no injuries.

“CCTV and other enquiries are ongoing.”