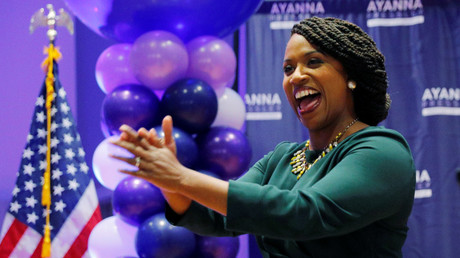 Across the US, younger, ethnically diverse candidates, many of them with far-left platforms, are reshaping the Democratic Party. However, in liberal Boston, progressivism is nothing new.

The story is becoming a familiar one. A younger, black woman defeating an older white man who has comfortably held his post for decades, despite the former raising less money and trailing in the polls.

READ MORE: Florida governor election: It’s going to be a battle of the Bernies vs. the Trumpists

Pressley had the endorsement of Ocasio-Cortez, whose victory in New York this summer prompted Democratic National Committee chairman Tom Perez to declare her “the future of our party,” as the party shifts leftward from the watery managerialism of Hillary Clinton and her ilk.

Congratulations to my sister in service, @AyannaPressley, on continuing her historic path into Congress tonight.

Let’s push together to make Medicare for All, tuition free college, & living wages a reality in America – all without corporate PAC money. 🇺🇸 https://t.co/o2SbtUkByS

Pressley shares many of her positions with Ocasio-Cortez, but stops short of describing herself as a socialist. However, while the mainstream media portrays her win as another victory for young progressives over the Democratic old guard, Pressley’s Boston district is a deeply liberal one, and both her and Capuano’s platforms both leaned sharply to the left.

Capuano voted against the Iraq War and the Patriot Act, and supported Medicare-for-all and sanctuary cities long before they became mainstream ideas. He also wavered back and forth on impeaching President Trump since last year, and both candidates have admitted that they would likely vote the same way on key issues.

Capuano is a 20-year progressive who voted against the Iraq War and the Patriot Act. He lost his Democratic primary tonight after his opponent accused him of simply voting the right way, not leading a movement. Buckle up folks. This is real.https://t.co/G6YeFvaJbg

Unlike Ocasio-Cortez, Pressley’s rise through the ranks of the Democratic Party was a more traditional one. After working as a staffer for Senator John Kerry and Rep. Joe Kennedy, and becoming the first black woman elected to Boston City Council, Pressley was given a ‘rising star’ award by Democrat activist group EMILY’s List in 2015, speaking at the group’s gala awards ceremony alongside then-presidential hopeful Hillary Clinton.

Capuano campaigned on his congressional experience, and his ability to use his connections to bring federal money to Boston. Pressley on the other hand portrayed herself as an activist candidate. She leant on her identity, and argued that, as a black woman, she was more fitting to represent her ethnically diverse district.

Pressley’s campaign railed against “structural racism,” and in her victory speech, she told supporters that her win was “for those who don’t see themselves reflected in politics and government.”

She also wasted no time in bashing President Trump. “Our president is a racist, misogynistic, truly empathy-bankrupt man,” she told supporters. “It is time to show Washington, DC; both my fellow Democrats, who I hope will stand with us and Republicans who may stand in our way … change is coming and the future belongs to all of us.”

With no Republican challenger in her district, Pressley’s path to Congress this November is clear. Her fellow Democrats, establishment or progressive, will need to win 23 seats to take back the House of Representatives.