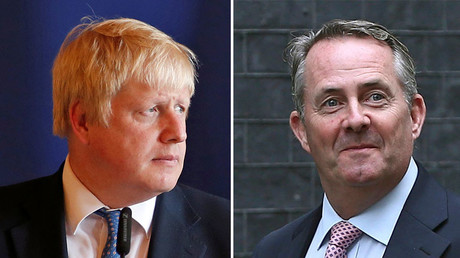 Prime Minister Theresa May has told Foreign Secretary Boris Johnson and International Trade Secretary Liam Fox to cool it after a clash over which department will handle economic diplomacy.

The role has traditionally belonged to the Foreign Office, now led by Johnson, but Fox, who heads the new post-Brexit Department for International Trade, wants the role signed over to him.

In a letter to May leaked on Sunday, Fox called for a “rational restructuring” of diplomacy which would allow his office to take “clear leadership of the trade and investment agenda.”

Fox said economic diplomacy is “crucial to delivery of the objectives I have been set by the Prime Minister as international trade secretary.”

He said it had become clear during his first few weeks in charge that “existing cross-Whitehall structures” make it hard to take “the holistic approach it might have on trade and investment agendas.”

“I strongly believe this will be the only chance we get to materially change the approach we take to trade and investment and, as such, would urge you to consider this proposition favourably,” he added.

If successful, the interdepartmental coup would see Johnson’s Foreign Office remit trimmed back to include just conventional diplomacy and intelligence.

A government spokesman told the Independent they would not comment on the row, but that Foreign Office personnel are working with the Department for International Trade to streamline processes.

A source told the Telegraph on Sunday that May was “unimpressed” by Fox’s behavior and wants her senior ministers to “stop wasting time” and concentrate on delivering Brexit.

“She does not stand for any of that nonsense. She is not happy. They have got plenty to get on with,” the anonymous source added.