Labour MP Chris Williamson has attacked the UK government’s handling of the Skripal poisoning, drawing parallels with the infamous ‘dodgy dossier’ that was used as intelligence to invade Iraq, in a video posted online.

In a Twitter video, Williamson slams UK Foreign Secretary Boris Johnson, remarking that “quite frankly, he misled the public,” over the investigation into the poisoning of ex-double agent Sergei Skripal and his daughter, Yulia.

Johnson’s held a, now notorious, interview with German TV channel Deutsche Welle in which he told the journalist he had received “categorical” assurances that Russia produced the nerve agent allegedly used in the attack.

Daring to question the integrity of government intelligence marks you as a “traitor”. Yet with the Iraq War in recent memory – and new information on the Skripal case – it’s clear Britain needs a leader with a cool head. ↓ pic.twitter.com/I8YmWiAvOq

“I mean, the people from [UK military laboratory] Porton Down, they were absolutely categorical. I mean I asked the guy myself. I said are you sure? And he said, ‘There’s no doubt,’” Johnson said.

Williamson, highlighting Johnson’s apparent falsehood, cites Gavin Aitkenhead, the chief executive of the Defence Science and Technology Laboratory (DSTL) at Porton Down, who told Sky News the facility was unable to determine the origin of the nerve agent.

The Labour MP asked people to think back to the run-up to the 2003 Iraq War. Then, according to Williamson, there was a dangerous cocktail of misinformation coming out of the government, “an opposition slavishly” following the government line, and an uncritical media all in the name of “national security,” leading us into a war the majority of the British population didn’t back.

“Just like the dodgy dossier in the run-up to the Iraq War, we’ve seen how a government is willing to stretch the truth, to shut down any critical questioning,” Williamson remarks. 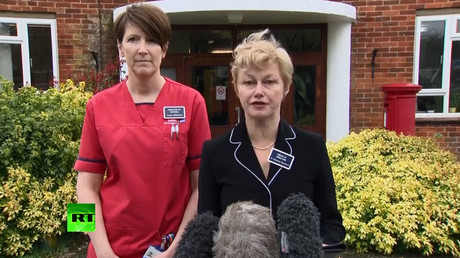 Just as the political and media establishment failed to hold the government to account in the rush to war in 2003, the same establishment groups now appear to be driving to apportion blame before a thorough criminal investigation, aided by the Organization for the Prohibition of Chemical Weapons (OPCW), has taken place.

The unwillingness from Prime Minister Theresa May and certain government ministers to wait for due process to take place has, for the MP, only harmed international relations. “The bottom line is, Theresa May, Boris Johnson and the Conservative government escalated international tensions when the evidence wasn’t and still isn’t, clear.”

The Labour MP concludes by remarking on the sharp contrast of Jeremy Corbyn’s apparently more level-headed approach to the Skripal poisoning case, saying: “As we find out more about the Salisbury attack, it shows that Jeremy Corbyn’s call for an evidence-based approach to foreign policy is the best way to serve the national interest.”

Since resigning from the frontbench, it appears Williamson has been able to speak more freely on issues that he is passionate about. Having to toe the official party line was too restrictive for the North Derby MP, and upon leaving the shadow cabinet, Williamson has further called for the doubling of council tax bills for the highest-value homes in England – an issue that originally led to his resignation.

His latest online video is likely to resonate with a lot of the British public, with him widening out the context of the debate to include past foreign affairs debacles like the Iraq War, even if it inevitably riles the political and media establishment.