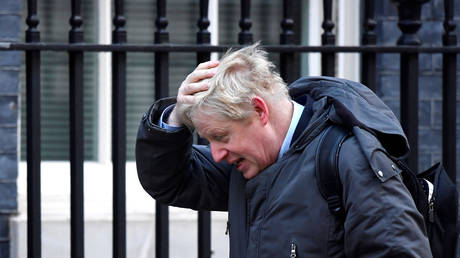 Former foreign secretary Boris Johnson has caused uproar after claiming that £60 million ($79 million) of police money has been wasted on investigations into historic child abuse, when it should be used to protect the public.

During an interview with LBC radio, Johnson was asked whether he thought there was a correlation between police budget and personnel cuts, and an increase in crime. He insisted keeping police officer numbers high was a priority but that it depends on where the money is spent.

I think an awful lot of money and an awful lot of police time now goes into these historic offences and all this malarkey. You know, £60 million ($79 million) I saw was being spaffed up a wall on some investigation into historic child abuse.

Johnson’s remarks attracted widespread criticism on social media, including from a number of Labour MPs.

Labour Chair Ian Lavery described Johnson’s remarks as “disgusting” and “an insult to every survivor of child sex abuse.” He urged the former foreign secretary, who has a litany of gaffes to his name, to apologize to the victims and families who have suffered.

Shadow Education Secretary Angela Rayner also called on Johnson to apologize for his comments, claiming that he had hit “a new low even for him.”

These disgusting comments are an insult to every survivor of child sex abuse. If @BorisJohnson has even a little bit of decency he will now apologise to the victims and families of those who have suffered. https://t.co/dyFt34CMVI

Boris Johnson hits a new low even for him, disgusting comments and he must apologise for his remarks, this self serving individual makes a career out of gaffes but this is truly awful stuff 😡 https://t.co/n2cTDaJdzG

The UK’s former chief prosecutor, Nazir Afzal, who is a solicitor with experience in the legal areas of child sexual exploitation, hit out at Johnson’s ‘waste of money’ remarks. Afzal insisted that the former foreign secretary should tell that to the victims “whose lives were devastated by abusers.”

Tell that to those whose lives were devastated by abusers
Tell that Frances Andrade who took her own life 30 yrs after the abuse she lived with every dayhttps://t.co/QK95zE30WX

Johnson has made a series of offensive remarks both before and during his time as an MP. Last year, he described women who wear the niqab as “letter boxes,” and compared those who wear burqas to a “bank robber.”

He has previously called black people “piccaninnies” with “watermelon smiles,” former US president Barack Obama as “part-Kenyan,” and talked about whisky exports in a Sikh temple, prompting outrage from many quarters, including among his fellow Tory MPs.