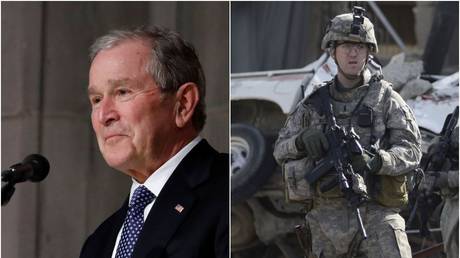 Borders are not imaginary lines and must be respected by all, former president George W. Bush has declared, apparently unaware of the numerous border-defying US bombings and invasions during his administration. Twitter remembers!

Weighing in on the contentious immigration debate that has gripped the country, the Republican ex-president suggested that Americans should find a common middle ground in order to break the political deadlock.

“That starts with recognizing a plain responsibility at the border – and, in an often chaotic situation, being willing to state the obvious: Borders are not arbitrary and they need to be respected – along with the fine men and women of immigration services and our Border Patrol,” he said during a naturalization ceremony for new citizens, hosted at the Bush Presidential Center in Dallas, Texas.

His comments come as Donald Trump locks horns with Congress over his declared state of the emergency at the US-Mexico border – a crisis that, according to Trump, can be alleviated by building a wall to keep out illegal immigrants.

But is Bush really the right person to lecture America about the sanctity of borders? “No,” answered Twitter.

“Borders need to be respected? Lmao,” wrote one Twitter user, who then proceeded to tally up the number of civilians and American servicemembers killed and maimed during the US invasion and occupation of Iraq.

“Unless it’s the Iraq border, right?” quipped another netizen.

Unless its the Iraq border, right?

Others pointed out that disastrous US policies in Latin and South America have played a key role in destabilizing the region, creating the immigration “mess” which Bush said he was so eager to solve.

Indeed, it seems odd that the former president would suddenly hold the borders of sovereign nations in such high esteem. Bush, whose popularity has soared among liberals after he shared a cough drop with Michelle Obama, is credited with bombing and/or invading Afghanistan, Iraq, Pakistan and Somalia. The US is also believed to have carried out drone attacks in Yemen and the Philippines during Bush’s two terms.

However, unlike other illegal border infringements, Bush was never locked in a cage while he awaited deportation. Instead, he took up painting.