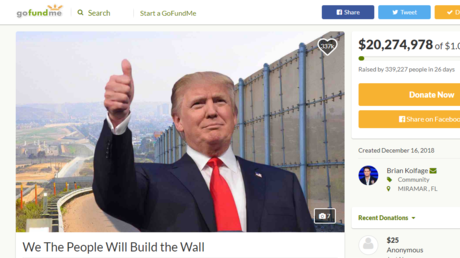 After collecting a staggering $20 million, a fundraiser to help build a wall along the US southern border is being shut down because it failed to reach its target. However campaigners are now pledging to build the wall themselves.

The campaign shot to prominence last month, garnering $2 million in donations in just a couple of days. That impressive pace continued and before long the fundraiser had racked up more than $20 million in donations, meaning, had it been successful, it would have been one of the biggest GoFundMe campaigns ever.


However that figure still fell far short of its aim to raise $1 billion so GoFundMe has said that everyone who donated to the drive will be refunded, Business Insider reports.

The fundraiser was set up by Brian Kolfage, who is a triple amputee, a Purple Heart Recipient and a motivational speaker. He announced the refunds in an update on Friday.

As the government shutdown grinds on in the US, Kolfage said that authorities won’t be able to accept the donations any time soon so he has created a non-profit organization – named “We Build the Wall, Inc.,” – in hopes of continuing fundraising and building a border wall independently.

“Our highly experienced team is highly confident that we can complete significant segments of the wall in less time, and for far less money, than the federal government, while meeting or exceeding all required regulatory, engineering, and environmental specifications,” Kolfage said.

Our team strongly believes that we can complete our segments of the wall for less than half of the government’s estimated costs on a per mile basis.

Erik Prince, the founder of the security firm Blackwater, and Brigadier General Robert S. Spalding III are among the group of “experts” listed by Kolfage.

Also on rt.com
Prolonged shutdown may cost more than wall Trump asked for


People who want their donations redirected to Kolfage’s new organization will have to proactively elect to do so, a GoFundMe spokesperson explained to Business Insider. “If they do not take that step, they will automatically receive a full refund,” the spokesperson said.