Thousands of texts between two FBI officials involved in the Clinton email and Trump-Russia probes are being filtered through Washington’s partisan lens, with Republicans seeing treason and Democrats saying they amount to nothing.

Messages between FBI agent Peter Strzok and bureau attorney Lisa Page, who were having an extramarital affair at the time, were included in a 54-page appendix to the 25-page report released late Tuesday by the Senate Homeland Security and Governmental Affairs committee.

By contrast, the Democrats’ media operatives dismissed them as irrelevant, and used the timing of one of the messages to argue it had nothing to do with the Clinton investigation.

The actual message in question was sent from Strzok to Page on September 2, 2016, wherein he explains he is drafting talking points for D – presumably then-FBI Director James Comey – because “POTUS wants to know everything we’re doing,” meaning then-President Barack Obama. 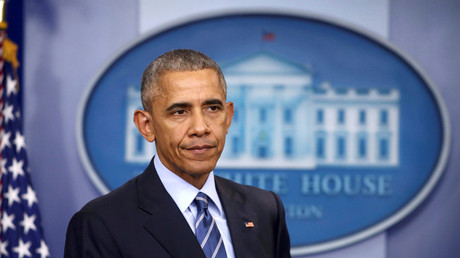 Multiple outlets have pointed out that this couldn’t have had anything to do with the Clinton email investigation, since that had been closed in July. The FBI only reopened the probe in late September, after finding a number of emails from Hillary Clinton’s home server on the laptop of disgraced congressman Anthony Weiner, husband of Clinton aide Huma Abedin.

It’s worth noting that the text exchange reveals that those emails were found on September 28, 2016, a month before Comey publicly informed Congress about reopening the probe. Comey’s letter came less than two weeks before election day, amid the daily drip of emails from Clinton’s campaign chairman John Podesta’s private account being released by WikiLeaks. Clinton and the Democrats later blamed Comey and Deputy FBI Director Andrew McCabe for her loss, but that abruptly stopped after Comey’s firing by President Donald Trump in May 2017.

It is far more likely that Strzok’s text refers to the FBI briefing Obama on the so-called “Russian collusion” probe, the bureau’s counterintelligence investigation into the Clinton camp’s claims that Trump was somehow in league with the Russian government.

Take that, Republicans! Except if that’s the case, it raises even more questions about what Obama knew and when.

Though the committee’s report was titled ‘The Clinton Email Scandal and the FBI’s Investigation of it,’ it clearly wasn’t limited to it. The Strzok-Page texts included in the appendix continue long after the probe was closed for the second time, with the very last one dated June 25, 2017.

That one, incidentally, has Page telling Strzok “Please don’t ever text me again.” Just over a month later, on July 27, Strzok would be removed from special counsel Robert Mueller’s staff and relegated to the FBI’s human resource department, after Mueller was informed of his exchanges with Page. 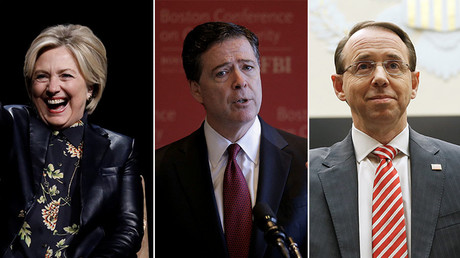 There is no denying that the texts show the two FBI officials’ absolute disdain for Trump. For example, on election night of November 8, 2016, Strzok describes the results as “f***ing terrifying” and Page responds with “Omg, I am so depressed.”

On November 14, Page references a meeting that makes her angry, because there is “lots of high fallutin’ [sic] national security talk. Meanwhile we have OUR task ahead of us.”

Wasn’t the FBI’s probe into Trump’s “Russia collusion” a national security matter? What, then, was “our task” that Page was referring to? Inquiring minds would want to know.

There are also references to someone possibly within the FBI leaking to the New York Times and the Washington Post, but the names of the suspected leakers have been redacted. Strzok complains on June 15, 2017 about being excluded from a meeting on leaks, even though dealing with those is “what I do for a living.”

This is just two FBI officials whose biases were brought into the open because they carelessly exchanged over 50,000 text messages, plus emails and iMessages. An unknown number of texts between mid-December 2016 and mid-May 2017 were not included in the document, presumably because the FBI told the Senate they had been “misplaced.” The bureau’s inspector-general says he has them, however.

What these texts reveal, or hint at, is not quite a slam-dunk some of President Trump’s supporters would like it to be. But they are hardly nothing, as Democrats claim. In Washington, however, truth still takes a back seat to politics.