Large steel structures, bollards, and crash-proof barricades have been installed in central London overnight, in the wake of the deadly car-and-knife rampage.

The new defenses have been erected in the City of Westminster to make it more difficult for an attacker using a vehicle to ram into people.

“They are not oppressive and they are here for our security. It doesn’t stop people going about their normal daily business but it does help stop any terrorist attacks, such as the ones in Berlin or in Westminster the other night,” Derek, a Londoner, told Ruptly.

Together with these new defenses, specialized firearms officers have been stationed at checkpoints throughout the City of Westminster. Typically, British police don’t carry guns, so special firearms units have to be called in for terrorist attacks and arresting armed suspects.

“The police service will sustain an enhanced armed and unarmed presence over the next few days,” said Scotland Yard counter-terrorism chief Mark Rowley.

“In London the number of armed officers remains at near double strength, while in other parts of the UK there are up to a third more armed officers on duty.”

The police have also deployed seven-ton armored trucks, nicknamed “Guardians,” as an extra security measure. These Jankel trucks are equipped with bulletproof glass and are able to knock down barriers and withstand bomb blasts, according to the Sun. The Jankels were last deployed during the summer riots of 2011.

“I think we should look at all the options. I think maybe making at least part of it [Parliament Square] pedestrian-only might be an idea, the bit immediately in front of the main entrance,” Conservative MP Chris Philp told Sky News.

“This method of attack where a vehicle is used to drive into pedestrians is one that has been used in France, Berlin and somebody tried to do it yesterday in Belgium,” he added. 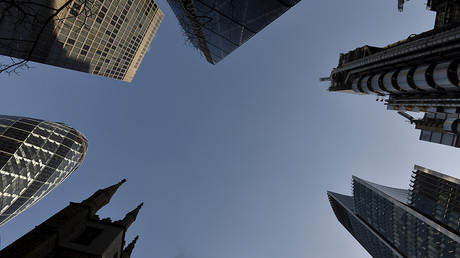 “So I think we do need to look at areas near sensitive sites where there are lots of pedestrians and look at putting up more bollards.”

“Parliament itself is surrounded by very large bollards that a lorry can’t drive through – that was designed to stop lorries laden with explosives being driven at the building.”

On Wednesday, 52-year-old British citizen Khalid Masood, born Adrian Russell Ajao, mowed down several people on Westminster Bridge with a 4×4 vehicle, before crashing it into a fence outside the Houses of Parliament and then stabbing a policeman to death. Four people were killed and fifty injured in the attack, which ended with Masood being shot dead by the police.

In the early 1990s, a “ring of steel” of manned checkpoints and surveillance cameras was set up in the City of London after a series of bombings and terrorist attacks by the Provisional Irish Republican Army (IRA). The checkpoints were largely abandoned after a ceasefire deal was reached with the IRA in 1994. In December, plans were revealed for a new £5 million ($6.2 million) “ring of steel” to protect the City’s many vulnerable skyscrapers.