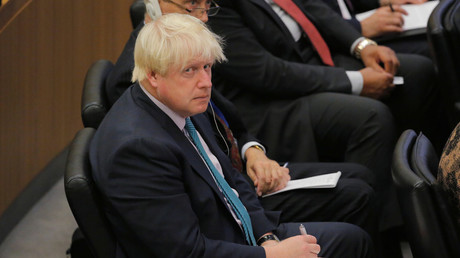 British foreign secretary, Boris Johnson’s overseas trips are often watched with a certain amount of anticipation from those at home – and in his party –  and not often for good reasons.

From over-excitedly tackling a small Japanese boy during a rugby game to unwisely singing Rudyard Kipling’s ‘The Road to Mandalay’ colonial-era poem, while visiting one of Myanmar’s holiest site, the UK’s top diplomat has form when it comes to undiplomatic relations.

But the opening leg of his five-day Latin American trip, which marked the first time a British foreign secretary has visited Peru in over 50 years, has gone almost surprisingly, gaffe-free.

The stop-over is part of a drive by the Foreign Office to forge closer trade and cultural links with South American states, including Peru, following Brexit.

Visiting a school in the village of Santa Marta, on the banks of the Amazon, where a UK-funded solar power scheme has provided it with electricity, Paddington Boris avoided any references to the literary bear’s dimly-lit homeland.

Instead, he got involved in a spot of slightly awkward dancing with a teacher during a performance led by the students of the school. He also discussed Harry Potter and Peru’s chances at this year’s World Cup with the students, which kicks off next month in Russia.

Johnson came close to a gaffe, when he told them: “England is in the World Cup too. We’re not so… I’d better be careful what I say.”

He also visited a stadium in the Peruvian capital Lima, as well as the Amazon Rescue Center, joking that a slow-moving manatee reminded him of an unnamed MP.

His next stop Argentina, and the first foreign secretary to visit since 1993, saw meetings with the President Mauricio Macri and the laying of a wreath in Buenos Aires to commemorate those who died in the 1982 Falklands conflict.