Brexiteer Boris Johnson says the UK government should withhold at least half of its multi-billion divorce settlement with the European Union and reiterated calls for a bridge to be built linking Northern Ireland with Scotland.

Tory MP Johnson, who resigned as Prime Minister Theresa May’s foreign secretary in July over her direction on Brexit, made the comments while addressing Democratic Unionist Party (DUP) members attending their annual conference in Belfast on Saturday. 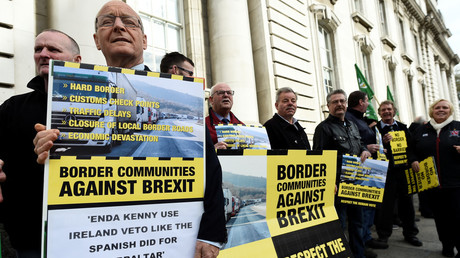 In his speech, Johnson called for the UK to withhold at least half of the €39 billion ($44.2bn) Brexit withdrawal payment owed to Brussels, and that the UK should “junk the backstop” – the mechanism that aims to prevent a hard border between Northern Ireland and the Republic in the event of a no-deal Brexit.

For the EU, this backstop would involve only Northern Ireland adhering to certain EU laws after Brexit, and a border down the Irish Sea.

However, this is an unpalatable option for NI’s unionists, who insist on a backstop for all of the UK or none at all, for fear it would undermine NI’s position within the union.

As a result, the DUP’s ten Westminster MPs have threatened to revise the confidence and supply deal agreed with May’s minority government in 2017, if the current withdrawal agreement from the EU was approved in parliament.

In an attempt to perhaps build both metaphorical and literal bridges post-Brexit, Johnson also reiterated an earlier dream to have a bridge built connecting NI with Scotland.

“It is a far shorter distance than that covered by some bridges these days – look at Shanghai to Ningbo,” he said of the short distance separating both nations peninsulas.

Rather than a lack of funds for such a project, Johnson said: “The problem is an absence of political will.”

The DUP too are in favor of such a link with the party’s leader Arlene Foster saying earlier this year that there was “growing support” for the project.

READ MORE: Brexit backtrack begins… Raab would rather stay in EU than accept May deal

However, attempts to give the project legs in the past have proven difficult.

Cost projections estimate the bridge’s cost at £20 billion ($25.6bn), and while the longest distance would be around 30 miles, those constructing the bridge would have to deal with seas three times deeper than the English Channel separating the UK from France.