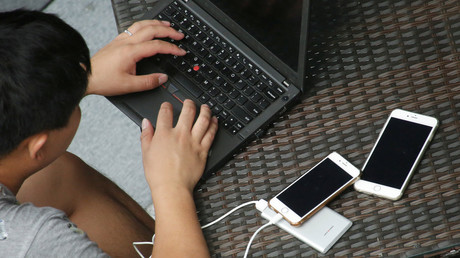 Blue light emitted from smartphone and laptop screens speeds up blindness by transforming vital molecules in the eye’s retina into cell killers, according to new research.

The study, carried out by optical chemistry researchers at the University of Toledo, explains how exposure to blue light can cause age-related macular degeneration – one of the leading worldwide causes of blindness.

“It’s no secret that blue light harms our vision by damaging the eye’s retina. Our experiments explain how this happens, and we hope this leads to therapies that slow macular degeneration, such as a new kind of eye drop,” study co-author Ajith Karunarathne said.

Macular degeneration occurs when photoreceptor cells in the retina die – these cells need molecules called retinal in order to sense light and trigger signals to the brain.

The cells do not regenerate, so “when they’re dead, they’re dead for good,” Ratnayake added.

READ MORE: WATCH the mesmerizing dance of chromosomes inside our cells (VIDEO)

“The retinal-generated toxicity by blue light is universal. It can kill any cell type,” Karunarathne said. Blue light alone or retinal without blue light had no effect on cells, however.

The lab currently is measuring light coming from television, cell phone and tablet screens to get a better grasp of how the cells in the eyes respond to everyday blue light exposure.

Details of the research have been published in Scientific Reports.