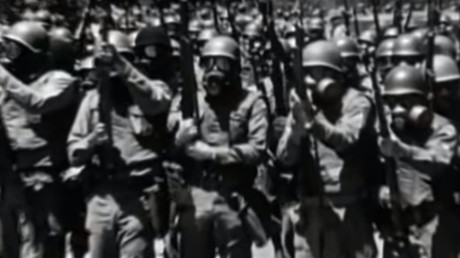 Forty-seven years ago, the US National Guard and armed police violently targeted students and anti-war demonstrators in an unfair fight over a small community park in Berkeley, California.

Later termed the Battle For People’s Park, one person was killed and scores injured as police fired shotguns indiscriminately in a bid to disperse demonstrators on the Berkeley campus on 15 May, 1969.

With the blessing of then-California governor Ronald Reagan, armed police and soldiers carrying bayonets tackled protesters, many of them students, in a small park set up on unused University of California property.

Earmarked for a million dollar development, the area was left vacant by the university and transformed by students into a community park.

On April 18 1969, an article entitled ‘Hear Ye, Hear Ye’ in the Berkeley Barb informed readers about the guerilla pop-up park. “A park will be built this Sunday between Dwight and Haste,” it read. “The land is owned by the university which tore down a lot of beautiful houses in order to build a swamp.”

“In a year the university will build a cement type expensive parking lot which will fiercely compete with the other lots for the allegiance of Berkeley’s Buicks.

“On Sunday we will stop this shit. Bring shovels, hoses, chains, grass, paints, flowers, trees, bull dozers, top soil, colorful smiles, laughter and lots of sweat … we want the park to be a cultural, political freak out and rap center for the Western world.”

‘Lay down some rules’

In 1967, Governor Reagan expressed his contempt for liberal activism on university campuses in a letter to San Francisco State College, suggesting it was time to take on the “neurotics” running California’s colleges and “lay down some rules of conduct for the students”.

“How far do we go in tolerating these people & this trash under the excuse of academic freedom & freedom of expression?”

The events of Bloody Thursday followed days of tension as rumours spread that the university would attempt to reclaim the People’s Park area.

In the week leading up to the riots, Youth International Party member and anti-war activist Stew Albert wrote in the Berkeley Barb newspaper that “park commissioners” were not prepared to “let the university piss its fascist thing on our flowers of freedom”.

Despite this, University of California executive vice chancellor Earl Cheit said he “expected no conflict” over the park.

He could not have been more wrong as Reagan allowed law enforcement to use “whatever force is necessary” in their eviction of park inhabitants on May 15.

Thousands of protesters had gathered in the park when police opened fire with shotguns and buckshot. Student James Rector, 25, died from police gunshot wounds, while another man was blinded in the chaos that unfolded near Telegraph Avenue.

A 1969 police report, held by the Online Archive of California, reveals that more than 400 protesters were picked up in arrests on Bloody Thursday. According to University of California Police Department, 111 police officers were also injured in a riot sparked by the police raid.

At the time, the Desert Sun newspaper described how Reagan “mobilized a ‘substantial number’ of Guardsmen and clamped a strict nighttime curfew on the city and campus.”

“At least 128 persons were injured in the conflict, including 32 hit by blasts of bird shot from police shotguns,” the paper reported.

In the days following Bloody Thursday, riot police and helicopter tear gas were used as crowd control. “Lines of soldiers with fixed bayonets and California Highway Patrolmen prevented the demonstrators from moving off the campus toward city hall,” a Desert Sun report stated.

“Two hours after the aerial gas attack, Highway Patrolmen, Alameda County Sheriff’s deputies and police from nearby Oakland swept through the streets near the campus.”

Much like camps set up by the more recent Occupy Movement, People’s Park became a symbol of opposition towards the political establishment.

The Berkeley community park was set up at a time when the university was a hotbed for counterculture movements and anti-war Vietnam protest.