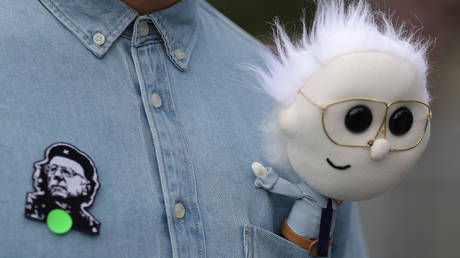 The Washington Post has a problem with Bernie Sanders. Since March 18, the newspaper has run no less than 10 anti-Sanders op-eds — and its agenda approaching the 2020 election has become glaringly obvious.

The recent spate of anti-Sanders screeds was highlighted on Twitter by columnist and Sanders campaign advisor David Sirota, who posted screenshot images showing a selection of the headlines in question.

“The press can’t let Sanders duck the hard questions,” demands one. “Bernie Sanders has emerged as the Donald Trump of the left,” declares another.“Electability’ and ‘Bernie’ don’t belong in the same sentence,” argues another.

Of the 10 pieces, five of them were written by conservative columnist Jennifer Rubin who seems to have developed a laser-focused hatred of the Vermont senator. The remaining five were posted by a selection of other writers.

The column labelling Sanders the “Trump of the left” was widely mocked on Twitter, where it was noted that author Dana Milbank’s wife work’s for Democratic presidential candidate John Hickenlooper and that comparing the two men based on their “weird hair” probably wasn’t a great road to go down (Milbank referred to Sanders’ “crazy hair” in the critique).

While the coverage of Sanders at popular right-wing websites like Breitbart and the Daily Caller is often cartoonish, red scare-style hysteria about his Democratic socialist credentials, WaPo masquerades as more ‘respectable’ and so its agenda isn’t as easily detectable to the average reader.

But it exists. In fact, the Post seems to have a long-running dislike of Sanders. During the 2016 presidential election, the newspaper ran a whopping 16 negative stories on Sanders in the space of 16 hours at a crucial juncture in and around the Democratic debate in Flint, Michigan.

“All of these posts paint [Sanders’] candidacy in a negative light, mainly by advancing the narrative that he’s a clueless white man incapable of winning over people of color or speaking to women,” media watchdog FAIR wrote.

Not only that, but the paper’s editorial board accused Sanders of “selling his own brand of fiction to a slice of the country that eagerly wants to buy it.”

FAIR pointed out at the time, that the Post is owned by Amazon CEO and libertarian multi-billionaire Jeff Bezos who is not exactly a fan of Sanders progressive, anti-billionaire politics. Fast-forward to 2019 and Sanders led the charge to force Amazon to raise its minimum wage for workers to $15 per hour, so he’s probably still not winning any brownie points with Bezos.

When Sanders announced in February that he would run for president again in 2020, the Post sprung into action, almost immediately pumping out four Sanders hit-pieces, including “Bernie, your moment has come—and gone,”“Bernie Sanders is probably just another one-hit wonder,” and a concerted effort by Rubin to diminish Sanders’ fundraising abilities in “Why Sanders’ money haul doesn’t matter very much.”

The paper is evidently eager to advance the narrative that Sanders’ time has come and gone, that his popularity, grassroots appeal and fundraising prowess don’t matter, that his policies are either too loony to support (or they have been adopted by other candidates, rendering him redundant). Ultimately, the message from the Post to Democrats is simple: Move on and fall in behind one of the establishment-approved candidates like Joe Biden. Rubin seems fairly fond of Biden, penning a piece this week about “why people love him” and how he could “come out even stronger” after apologizing for his touchy-feely behavior.

the @washingtonpost is canceled for posting such garbage. this biased hit job is irresponsible & clearly tows the @JeffBezos line of opposing Bernie bc he’ll actually make him pay @amazon taxes. I’m unfollowing WaPo as I can’t stand propaganda like this. https://t.co/MLbdDtwqJi

The blatant anti-Sanders agenda at WaPo seems to garner little, if any, attention from other mainstream media. The lack of interest is particularly curious given that US media jump on any opportunity they can to accuse certain ‘unapproved’ outlets of bias against one candidate or another.

Yet, here we have the Washington Post getting away with flagrant and shameless Bernie-bashing without so much as a raised eyebrow.