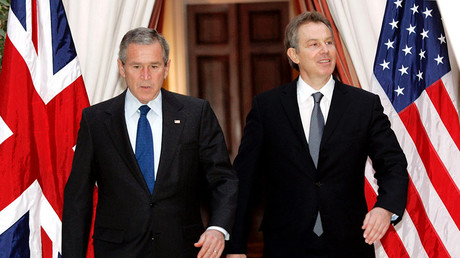 Tony Blair has taken responsibility for the Iraq War but refused to accept that Britain’s toppling of Saddam Hussein could have anything to do with spreading instability in the region.

In a nearly two hour-long news conference, the former prime minister said he still believes he acted in “good faith” and that the decision was the “hardest, most momentous, most agonizing” one he ever took.

The Chilcot report, however, suggests the legal base for the move was “far from satisfactory” and attributes the PM’s decisions to stubbornness.

In his response to the publication of the inquiry into the Iraq War, Blair argued he had to be a “decision maker” as the country’s leader and that in his judgment the world is today “a better place without Saddam Hussein.”

He went as far as to regret that current MPs did not support intervention in Syria in 2013, saying the decision “really dealt a blow” to Britain’s relationship with the US.

But while Tony Blair argued the war was “the right thing to do,” Sir John’s report shows the call for intervention was based on “Mr. Blair’s determination to stand alongside the US.”

And while Blair insists Chilcot proves there was “no secret commitment to war” made during his meeting with George W. Bush in April 2002 in Crawford Texas, the report does show evidence of his continued support for the US president’s own resolutions.

In a 2002 private memo between the two leaders declassified on Wednesday along the Chilcot report, Blair wrote to the US president: “I will be with you, whatever.”

The UN weapons inspectors were at that point still working in Iraq, having failed to find weapons of mass destruction.

Commenting on words exchanged between Blair and Bush at Camp David, US later that year, the Chilcot report adds: “Although at that stage no decision had been taken on which military package might be offered to the US for planning purposes, Mr. Blair also told President Bush that, if it came to war, the UK would take a significant military role.”

According to the document, it was also Blair’s idea to link the Afghanistan and Iraq military interventions as part of a wider campaign to prevent terrorism, “although there was no evidence of links between Iraq and Al Qaeda.”

Families of soldiers killed in the Iraq War are planning to pursue legal action against the former prime minister.