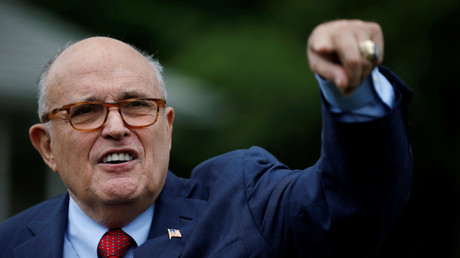 Rudy Giuliani spouted some rather confusing words on Sunday, telling NBC’s ‘Meet the Press’ that “truth isn’t truth.” The strange comment has sent social media into a frenzy.

“When you tell me that, you know, he should testify because he’s going to tell the truth and he shouldn’t worry, well that’s so silly because it’s somebody’s version of the truth. Not the truth,” Trump’s attorney Rudy Giuliani told ‘Meet the Press’ host Chuck Todd on Sunday, while stating that Special Counsel Robert Mueller was taking too long to end his investigation.

The comment has left the internet baffled, but as is usually the case, it has inspired a great deal of wittiness.

Rudy Giuliani just came up with the Trump 2020 slogan.

Others, however, struck a more serious tone, including Rep. Ted Lieu (D-CA).

The statement by Rudy Giuliani that “truth isn’t truth” is another step towards authoritarianism. It also reminds us of Nixon’s defense that “when the president does it, that means it is not illegal.”

Does this make you angry? Scared? If so, vote this Nov & get others to vote. https://t.co/gz9ixcYxVC

@RudyGiuliani you can not be serious. For you to have turned into a follower instead of leader amazes even me. Sad state we are in today.

Rudy Giuliani just told us everything we need to know about the Trump administration. “Truth isn’t truth” unless we tell you so. Fox News is the Fake News you seek. Shut it off. Ask public businesses to switch the channel. We must fight this propaganda machine of fear

The Sunday comment may at least lead to less ridicule for Trump adviser Kellyanne Conway, who has been mocked since famously coining the term “alternative facts.”